It is hoped an analysis of what lies beneath South Dunedin will improve stormwater systems in the flood-prone area.

Underground drilling assessments are being carried out by the Otago Regional Council and GNS Science including the drilling of deep bores, one at least 70m, to the bedrock.

Council natural hazards analyst Sharon Hornblow said the work was enabling scientists to ‘‘connect the dots’’ and create a three-dimensional model of what was underneath South Dunedin.

She was speaking yesterday at a drop-in session, as part of ‘‘South Dunedin Future’’, a joint project between the ORC and Dunedin City Council. 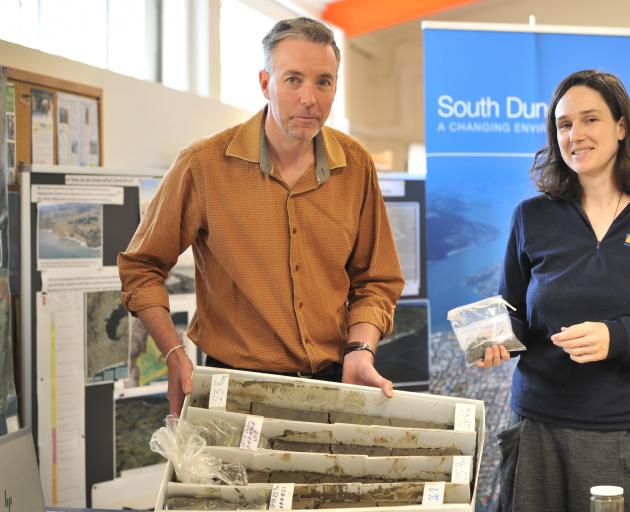 Informing the public of the geology of South Dunedin yesterday are Dunedin City Council communications and engagement adviser Ian Telfer and Otago Regional Council natural hazards analyst Sharon Hornblow. Photo: Christine O'Connor
‘‘This work will help us understand what engineering options might be best to create better stormwater systems that account for rainfall, high groundwater and tidal influence,’’ she said.

‘‘What we’re trying to do now ... is figure out how groundwater connects with seawater, and then how the groundwater nearer the surface that responds to rainfall behaves.’’

Dr Hornblow said groundwater data collection was ongoing, with results yet to be finalised, and would be used over the next two years.

The new model would assist the Dunedin City Council with pipe infrastructure modelling and ‘‘hopefully help us come up with options for better infrastructure investment’’.

The drilling project allowed for accurate estimates of the depth of basement rocks that underlie Dunedin — Dunedin volcanics and Caversham sandstone.

Dr Hornblow said knowing how deep the rocks were and what shape they formed was helpful for understanding ‘‘what the past environment looked like when sea levels were lower, and can shed more light on things like locations of active faults.’’

The next public drop-in session will be held on March 19 at the South Dunedin Community Pop-up.