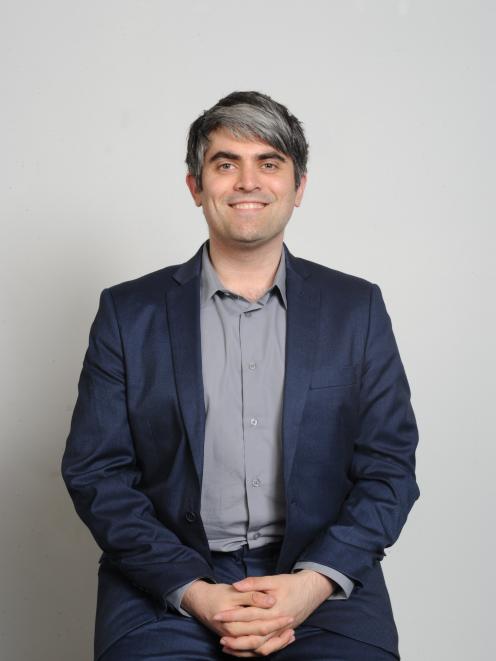 Green Party mayoral candidate Aaron Hawkins says Dunedin needs to place more emphasis on its environmental goals. Photo by Christine O'Connor.
What do you know about the 11 Dunedin candidates who are contesting the 2016 mayoral election? Chris Morris puts the questions to Aaron Hawkins.

Green Party mayoral candidate Aaron Hawkins says campaigning under his party's banner is the ''honest'' thing to do.

Cr Hawkins, a first-term city councillor, is again seeking to wrest the city's top job from incumbent Dave Cull, as well as putting his name forward for a second term as a city councillor.

He said running as a Green Party candidate did not mean he would be taking orders from Wellington, but could give the city a louder voice in the capital.

His focus would be on the city's environmental goals, including how best to respond to South Dunedin's challenges and to minimise, and adapt to, the impact of climate change.

Dunedin is incredibly lucky to have inherited vast wealth. We have world-class natural landscapes, education and cultural institutions and built heritage.

We need to celebrate those things, but also have an obligation to preserve them for future generations.

I'm running to offer a choice to the many people in this city who are generally positive about where the city's heading, economically and creatively especially, but who feel we need to place a stronger emphasis on our environmental goals.

To make Dunedin one of the great small cities, we need our infrastructure and our economic development to deliver on our community's environmental ambition.

If that's the kind of leadership people want to see in a mayor, then I'm a candidate that strongly holds that view.

What relevant experience do you bring?

I'm a sitting city councillor, Resource Management Act commissioner . . . I chair the city's Creative Dunedin Partnership, Youth Participation Advisory Group, and in the wider community I have experience as a trustee on various trusts, particularly in the creative community.

The biggest issue facing Dunedin is the same as it is anywhere in the world, and that is adapting to a changing climate, especially in our low-lying and coastal communities.

That means making the best plan we can to protect people on the flat, encouraging the development of a smart, green economy, and helping support workers and families as we go through that transition.

In the short-term, it means building stronger communities to help each other through these immediate challenges, including the impact of further flooding in low-lying areas, or droughts in the hinterland.

How would you deal with South Dunedin's flooding and climate change issues?

There are no easy answers from an adaptation point of view, and I'm loath to suggest anything would be the effective option. In terms of sea-level rise, we've got a few years to think about how we're going to deal with that, so rushing into those decisions is probably not ideal. But whatever the plan ends up looking like in South Dunedin, it has to be developed and led by that community, rather than imposed on them from the top down.

Do you have a view on the merits of managed retreat from South Dunedin?

I wouldn't rule anything in or anything out going into a conversation as significant as that . . . I would be guided by the ambitions and concerns of the community, and the best expert evidence and advice we can receive.

Do you have any plan to fix South Dunedin's stormwater system?

If the question is should we build a stormwater system that would mean it would never flood in South Dunedin under an extreme weather event . . . that would be a prohibitively expense option, I would suspect.

I think the implementation of the cycle network was disappointing, not just in terms of the cost of that project, but that the damage it's done to public confidence in that project.

Safe cycling is core infrastructure for a 21st-century city, and we need to continue to develop safe cycling routes.

I'm disappointed with the lack of traction we've got around creating a more pedestrian-friendly space in our central business district, particularly around the Octagon.

I think communication with residents affected by the floods last June . . . I think our communication was worse performing than our infrastructure was.

I'm proudest of our successful campaign to save the courthouse building and maintain the services within it. It was a huge victory for Dunedin and showed central government we won't take their neglect lying down.

As a council, we've made some really strong commitments in the long-term interests of our environment, divesting our shares in oil and gas industries, setting a target of being a carbon-neutral city by 2050, and setting clear milestones along the way ... and I'm proud of the work we've done with young people in the city.

Our overarching city vision statement is to be one of the world's great small cities . . . We have fantastic assets and resources, we offer a quality of life in the city that people the world over are envious of.

We need to adapt our offering to suit the kinds of industries that we need to encourage in our transition to a low-carbon economy . . . that is where council can make a difference in terms of being ''business-friendly''.

Who did you vote for in the last national election, and how would you describe your politics?

I voted for the Greens and for Dr David Clark [Labour] as my local member of Parliament. I would describe my politics as being committed to social justice and environmental sustainability, helping build a fairer, cleaner society for us and for the future generations to come.

I think it is an honest way of communicating to voters in Dunedin what my values and principles and priorities are.

Not once in the last three years have I ever received instructions from Wellington on how to vote or what to say. If anything, the reverse is true . . . I think the louder our voice can be in Wellington, the better.

How are you campaigning, and how are you funding it?

The campaign is largely based on having conversations with people . . . door-knocking and calling people to talk about local issues.

I'm paying for some of it, we're soliciting donations. There is a very small amount of funding we got from the party centrally.

It would be 'prohibitively' expensive to provide infrastructure in South Dunedin to ensure no flooding in extreme weather events. Therefore, there will be more flooding, as 'extreme' becomes the norm. What infrastructure, and how expensive? Put another way, what is the attitude of Ratepayers not resident in South Dunedin? After the election, SD will no longer be an election issue, currently portrayed as a Cull council failing. What then? Fatalism?