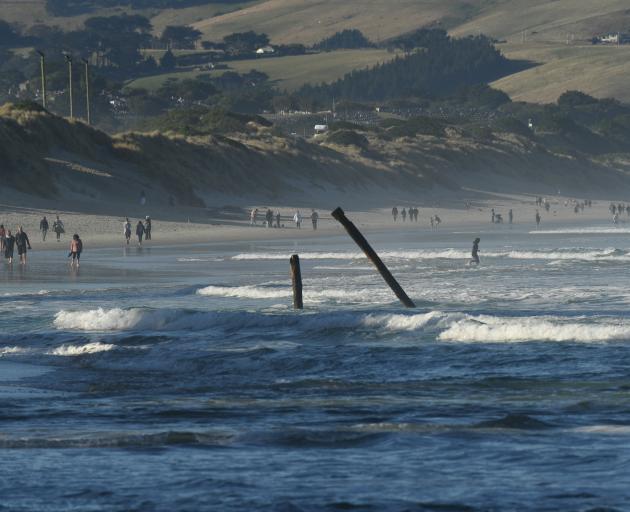 Early this month there were two groyne poles off St Clair Beach. Now there is only one left. PHOTO: STEPHEN JAQUIERY
A Dunedin city councillor and groyne campaigner is renewing his push for a five-year trial for a reinstated sand-trapping structure at St Clair Beach.

Cr Jules Radich put up a notice of motion for tomorrow’s council meeting, arguing a repaired wooden groyne would "bring back the beach" and the cost would be relatively low.

His campaign has historically struggled to find favour at the council and previous advocacy for a trial was defeated.

However, businesses on the Esplanade at St Clair have been united in endorsing the cause and a petition has attracted more than 4600 signatures.

Cr Radich is standing for the Dunedin mayoralty this year and is leading a campaign ticket called Team Dunedin.

The beach has again been battered this winter and just one of the poles that formed part of the spaced-plank groyne remains standing.

Barriers against reinstatement were primarily political, rather than a matter of practicality, he said.

The Dunedin City Council adopted a broad plan in February for how the coast from St Clair to St Kilda should be managed.

It focused on philosophical approaches after extensive engagement with the community, rather than pinning down specific techniques.

Cr Radich said at the time he could see how a groyne at St Clair might fit in with the council’s coastal plan.

The estimated cost for constructing a timber groyne was $150,000 and consenting costs were expected to be greater than $15,000, he said.

Cr Radich has said previously the sand-trapping structure could buy the city time before expensive solutions to erosion problems might become necessary.

He argued in material submitted for tomorrow’s council meeting groynes were included in the coastal plan and they would make the coast more resilient.

The technique would work at St Clair because sand tended to move along the shore in both directions, he said.

Reactive management approaches, such as using geobags, achieved little in the face of erosion and sea-level rise, he said.

"It is time to move from this reactive approach and undertake the easiest, least expensive and only proven St Clair sand-retention mechanism included in the coastal plan."

Cr Radich said the petition was by far the greatest community response about anything in the coastal plan engagement.

Some of his arguments, such as that experts agreed groynes worked well at St Clair, are likely to be challenged tomorrow.

ECoast oceanographer Ed Atkin has said erosion there was largely because of sand moving directly offshore during storms and it was not sustainable to consider a groyne as a long-term solution for episodic erosion.