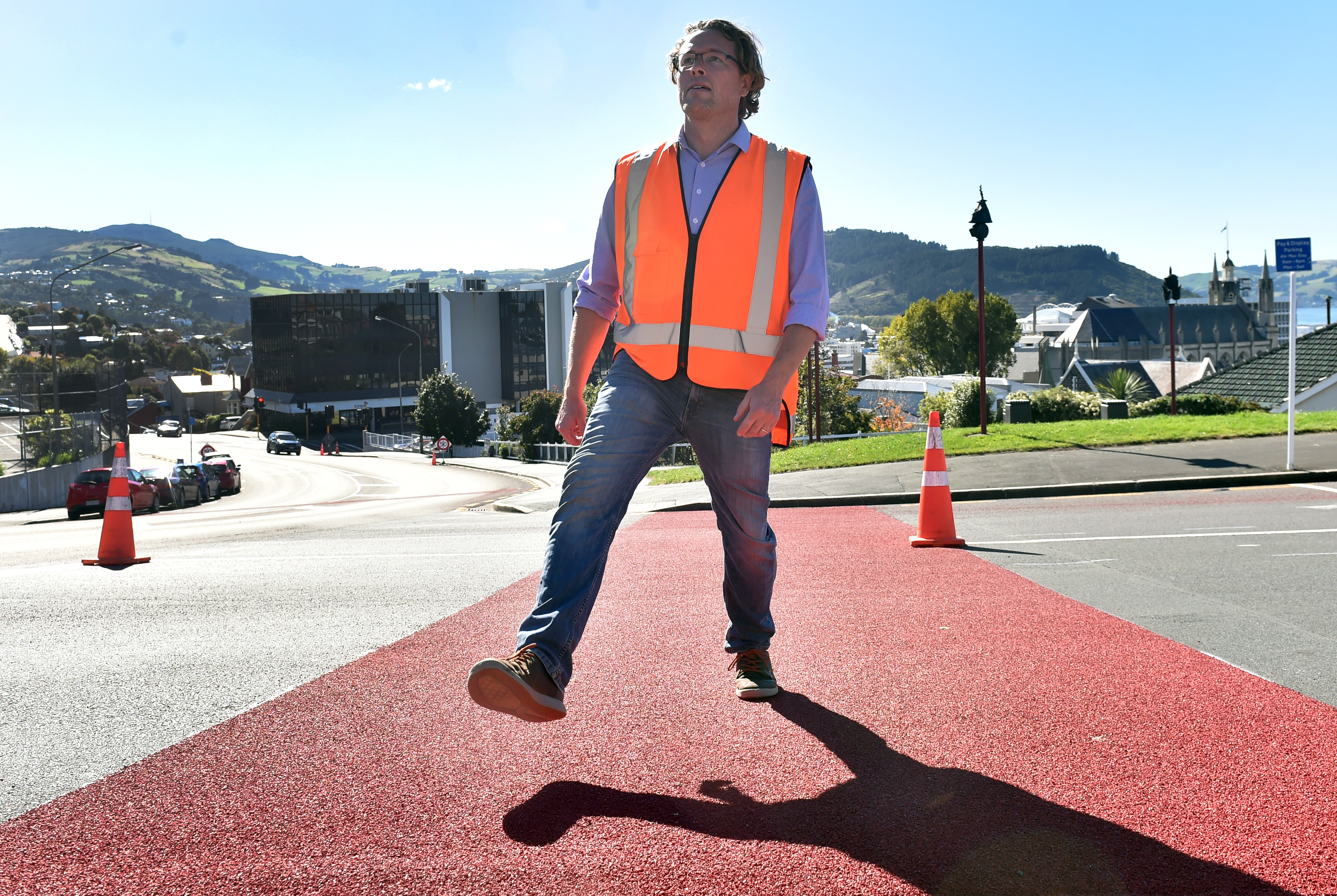 Dunedin City Council transport engineering and road safety team leader Hjarne Poulsen steps out on a new "safe crossing'' on the corner of Tennyson and Smith Sts in Dunedin. Photo: Peter McIntosh
Large red stripes that have appeared on Dunedin streets are part of a project to improve safety around a cluster of central city schools.

Dunedin City Council transport engineering and road safety team leader Hjarne Poulsen said the stripes were not pedestrian crossings, as cars had to give way at those, but did have a double purpose as a place people could safely cross and to signal to motorists that they were crossing a threshold into a new ''central school zone''.

The zone was being set up in consultation with the schools which identified a range of pedestrian and road safety concerns on the streets in that area, including issues with safety around road crossings, parking, especially for short-term visitors, and high speeds on some streets.

The stripes were the first part of a larger parcel of work and mark the entry points to the school zone.

They would be followed by bollards and signs, next week.

All work was temporary until it was confirmed it worked as desired - it could be removed - but Mr Poulsen was confident it would stay.

''It's a new thing and it takes getting used to, but generally people do get used to it.''

Concrete curbing around the red stripes and median strips as well as road markings would be added later.

The next stage of the project was introducing a speed limit reduction within the zone.

In the next few months the council expected to consult affected parties on either a 40kmh or 30kmh speed limit within the zone.

It would also consult on alterations to parking within the zone and putting more safe crossing points throughout the area.

The cost of that latter work was as yet unknown.

Most of the work was being done at night to minimise disruption, though one complaint has already been received.

Resident Roberta Coutts told the Otago Daily Times she almost slipped on ''small red globules'' that had apparently spread from the newly laid stripes on to the footpath on Stuart St yesterday.

''It is causing a very serious fall hazard. They are like walking on ice.''

Mr Poulsen said the small pieces from the stripes could come off until it was properly set, but that contractors were required to check and make sure areas around the stripes were cleared of any hazards regularly.

Some road safety improvements would also be done in Brown St next month, he said.

This cracks me up time and time again, this was on Social media a week ago because people didn't know what these were. Why does the DCC always fail to communicate with the Dunedin public on what is happening in the city. Some people thought it was the DCC was colour blind and bought the wrong colour paint, others thought it was where the towers for Culls village wall was to be built. Are these In spec with the NZTA and where are they mentioned and advised to NZ public, or is this another Thundering Good Ideas (TGI) by the DCC so the $8000 for the Ed art doesn't;t look as bad?