Signs advertising the benefits of life in one of Russell Lund's new Loan and Mercantile building apartments are remarkably similar to his election campaign signs.PHOTO: GERARD O'BRIEN
The competition for voters' attention is heating up in Dunedin's local body election campaign, as complaints of advertising signs in breach of rules flood in.

The boat was moored in Andersons Bay inlet, to display the trio's election signs, until it dragged its anchor in wild weather on Thursday and had to be retrieved after ramming into the inlet's rock wall.

On Friday, ORC regulatory general manager Richard Saunders said in a statement the boat the signs were attached to required a permit to occupy the common marine and coastal area. 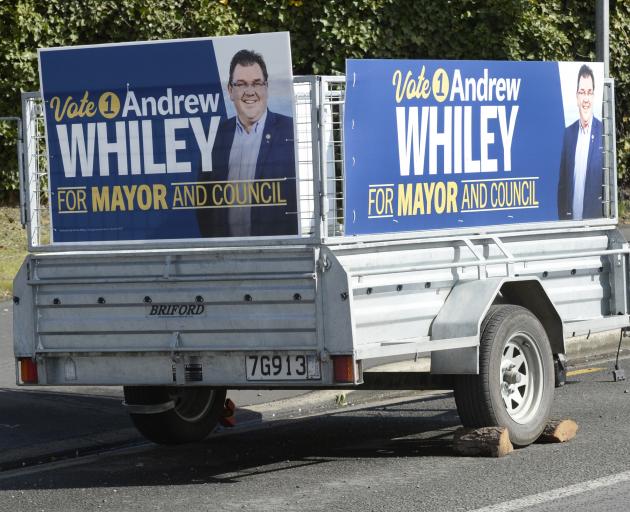 Trailers covered in signs, occupying car parks around the city, are fine. PHOTO: GERARD O'BRIEN
No consent had been sought or granted, and one complaint had been received, he said.

"Staff will be communicating with the candidates concerned to advise them that this activity requires a consent and cannot occur until that has been granted." 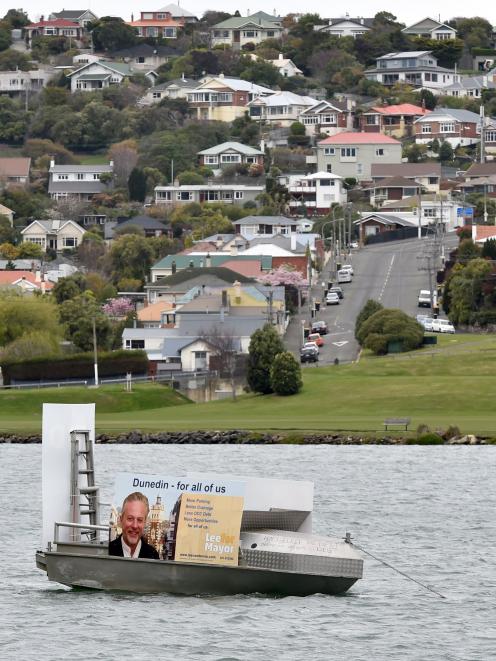 The rules governing floating election hoardings, like this boat used by Cr Lee Vandervis, Russell Lund and Hilary Calvert in Andersons Bay Inlet, are not clear. PHOTO: PETER MCINTOSH
Elsewhere, Mr Lund was also in disagreement with council staff about signage on his Loan and Mercantile building.

Mr Lund had contacted the Otago Daily Times earlier this month to alert the newspaper to the issue.

He said at the time it was "a coincidence" that the signs advertising the benefits of living in his building resembled his election signs, which had "similar themes".

Dunedin deputy electoral officer Sharon Bodeker said staff were "working on that one", while Dunedin City Council resource consents manager Alan Worthington would only say there appeared to be a difference of opinion over the matter.

"DCC say that they consider it to be election signage, which is an area of disagreement."

Ms Bodeker said she had fielded "dozens" of complaints in recent weeks, mostly from candidates complaining about their rivals' signs.

Most of the complaints related to the location of the signs - particularly those impeding views of the road - as well as those deemed to be too big or too high.

Complaints were referred to DCC compliance staff, who would "go and inspect and if a sign needs removing or if it is illegal they will let the candidate know, and get it dealt with".

Mr Worthington could not say how many complaints had resulted in action.

Ms Bodeker said the rules governing election signage limited them to no more than 2m high and 3sq m in total size.

Candidates were permitted to place signs at designated signage sites around the city, but no more than one picture of themselves per site, she said.

Anyone wanting to put a sign on a council reserve or road reserve needed council permission first.

They also had to display text with a minimum font size, so drivers "don't have to slow down to try and read it", she said.

"And it varies in different speed zones."

Signs on trailers parked on the side of the road were permitted, but had already generated some complaints from people upset about lost car parks, she said.

Ms Bodeker said she "wouldn't like to say" who the worst offender for signage breaches was.