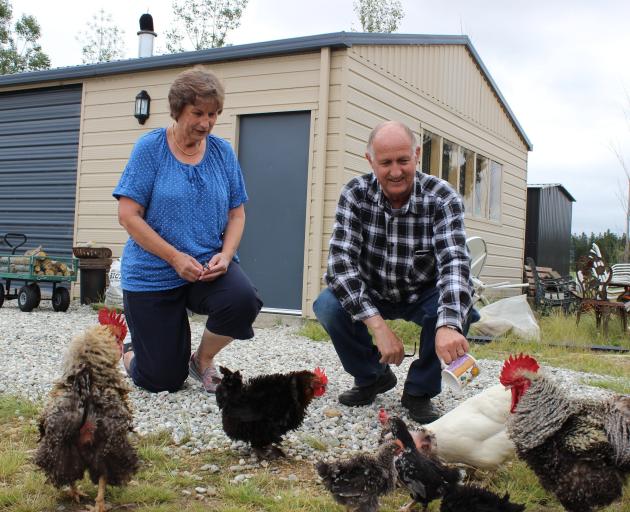 Lorraine and Steve Hawkins feed chickens on their property near Alexandra. Photo by Jono Edwards.
Steve Hawkins no longer fears the sound of rain.

Instead, he feels like a weight has lifted, after a nearly $1 million settlement ended a four-year fight with the Dunedin City Council over stormwater problems on his Otago Peninsula property.

But the 69-year-old still faces the prospect of living out of a container and a garage, and working into his 70s, while rebuilding on a new property at Alexandra.

And the DCC still faces a strict timetable to fix problems at the property, which it now owns, or risk a prosecution by the Otago Regional Council, DCC chief executive Dr Sue Bidrose has confirmed.

But Mr Hawkins and wife Lorraine are not complaining.

It was a far cry from late 2015, when Mr Hawkins went public with details of their protracted battle with the city council over a small creek running down their Otago Peninsula property.

The couple blamed the council for allowing development above their home that fed more stormwater into the creek and transformed it into a raging torrent that caused slips and erosion when it rained.

The council denied liability and insisted it had made ''exhaustive'' efforts to resolve the dispute, even as the two sides disagreed over the value of the Hawkins' property.

The two sides eventually agreed on binding arbitration in November last year, resulting in the council agreeing to buy the property for $800,000 in April this year, council rates information showed.

The Otago Daily Times understands the council has also paid about $100,000 to cover the Hawkins' legal and other costs, although the details remained confidential.

The council was planning to complete construction of a new pipe to carry the stormwater down the hill to Otago Harbour by next May, council water and waste group manager Dr Laura McElhone said.

The pipe was required to avoid the ire of the regional council, but could also allow the DCC to sell some, or all, of the land and recoup some of its costs, she said.

Dr McElhone would not say how much the work could cost, as a tender process was yet to conclude. Previous estimates ranged from $50,000 to $720,000, depending on what was built.

Dr Bidrose would only say the work would be ''expensive'' but necessary to avoid an ORC prosecution.

''We do have to deal with it so that we're not pouring silt into the harbour. Environmentally, that's just not sustainable any more.

''The regional council are keeping an eye and regularly asking us to keep them informed about the timeframes, because they will prosecute if we don't get the sediment run-off sorted.

''It is a critical thing to preserve the health of the harbour.''

She was pleased the dispute had finally been settled, allowing the Hawkins to leave behind a problem that was not of their making.

Dr McElhone said once the pipe was completed, the council would consider whether it could rent, subdivide or sell some or all of the property to recoup costs.

Mr Hawkins would not discuss the settlement but was full of praise for Dr Bidrose's ''marvellous'' efforts to resolve the dispute.

''I had lawyers up to my ears and they just sort of procrastinated and mucked around.

''What we got was disappointing, but I'm really happy to be out of there. Every time it rains now, we smile.''

From the article -- "''I had lawyers up to my ears and they just sort of procrastinated and mucked around." In some circles this is well known as "farming clients"