The Ministry of Business, Innovation and Employment this week released a bundle of documents used to support Dunedin’s bid for waterfront development cash from the Provincial Growth Fund.

Among them was an indicative business case prepared by consultant Beca, which outlined four possible approaches to progressing the project.

They ranged from a joint venture between private and public sector entities, or a partnership approach between the DCC, Otago Regional Council and Port Otago, to a private-sector led development.

However, each came with a list of identified pros and cons, and the preferred approach was the establishment of a new urban development authority to drive Dunedin’s waterfront development.

The authority would be in charge of delivering the development and responsible for key steps along the way.

That would range from resource consents and the development of business cases for aspects of the development to site purchases, the guidance of public and private sector investment, monitoring delivery and acting as a ‘‘development advocate’’.

It should also have responsibility for ‘‘master planning’’ covering a wider area, alongside the private sector and with the DCC.

It would be governed by a board comprising ‘‘people with a commercial interest’’ and have a small, core group of staff supported by a technical advisory panel of professional contractors, Beca suggested.

Representatives from Architecture Van Brandenburg, as designer of the waterfront vision, could have a role as part of the panel, but the report noted the need for flexibility in what was ultimately delivered.

‘‘It is not proposed to enforce strict compliance with the proposed design, as this will create a significant hurdle to investors.’’

Initial estimates - based on similar approaches elsewhere, including Wellington’s waterfront development agency - suggested a new agency for Dunedin’s waterfront could cost between $1 million and $3 million a year to run, Beca said.

That depended on the approach to resourcing selected, and ‘‘more detailed analysis of costs are required’’.

DCC chief executive Sue Bidrose, speaking earlier this week, said it was possible such an agency would not be needed until stage two of the waterfront development plan, when attention shifted to the southern side of Steamer Basin and more parties became involved.

However, the issue would be considered by councillors in the near future, she said. 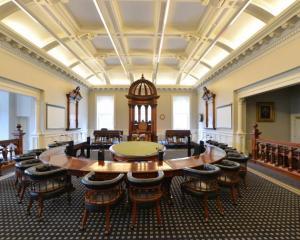 Why doesn't the DCC get in with developing the basin...so much talk and no action.

The money comes from ratepayers, NOT the DCC. The city has too many problems with basic infrastructure without adding to the cost. It's time for Dunedin residents and the DCC to sort the 'needs' from the 'wants'. No point putting new windows and doors into your house when the foundations and drainage are failing, if you get what I mean.

Let the private sector (not funded by DCC rate payers) run with this- completely. The DCC can do their thing by issuing consents etc as with any build. Why waste $$ on a project that suits Sydney not Dunedin. We have to grow up and know our limits. We already have one white elephant that loses the DCC millions every year, still being supported by our DCC & ORC rates (approx 10% of your rates goes to the stadium every year to the foreseeable future).

Whatever, I hope all concerned realise that sooner or later the seas will rise and much of the so called harbour side is reclaimed land. This is one big cockle shell that cannot move itself.

I understand that a large amount of staff from overseas are being sourced. As a qualified licenced builder LBP my wages on this project would be $25 - $28 p/h, that is using my own hand and power tools ( aprox $5000) and I am liable for workmanship defects / incorrect installation for 10 years. $6.10 more an hour than minimum wage in April....
My wages are being undercut by overseas staff, so let's slash this budget of $3m to $1.5 and add that they supply their own computers etc and they are liable for any defects for 10 years. If they are not willing to take this deal it needs to outsourced overseas.
Yes I aggree that a big project like the waterfront is a massive money maker for Dunedin BUT it seams that the trades are taking the hit for this to happen.
$25 is not a working wage for a carpenter.
If you want top quality workmanship, pay the bucks.

Not sure what you're saying Kezza, you say "I understand that a large amount of staff from overseas are being sourced". Then later in your comment you say "If they are not willing to take this deal it needs to outsourced overseas."
"My wages are being undercut by overseas staff". If they're working here they come under our labour, safety laws and wage regulations. Coupled with that is the simple fact we have a lot of big building going on and others being proposed , so where do you think all the 'trades' are going to come from? So yes, we will need workers from overseas, just like we needed them for the CHCH rebuild. Sadly, you may indeed get undercut, however, many people in so many industries also have had that happen, it's just a fact of life Kezza, nothing is certain. Being self employed, I to have faced that same issue, demands rise and fall, as do our incomes.

If you are a rate payer you have already done very well from capital gains, well beyond what we pay in rates. And it’s these sorts of developments that is part of the drive. Creating opportunities and jobs, so people want to live, work and set up businesses here. I don’t mind paying a bit extra to get stuff like this done, it’s a very good return on investment (I think it’s currently far too good).

In saying that, it is important to have some devils advocates so we do this properly. Sea level rise is obviously a concern. I hope it’s a few meters above the water, otherwise it could soon be a great sea life habitat. We should also be concerned with carbon emissions and environmental impact. It’s a good opportunity for making decisions that promote doing things more sustainably, encouraging broader change.

I can understand if you are retired, rates can be a bit more burdensome. If over 65 the DCC should offer the ability to defer rates on your property till it’s sold, it may be offered already.

"If you are a rate payer you have already done very well from capital gains"
Only those who would want to sell or borrow. Many just want to live in their homes, homes they have worked hard to pay for, homes they have raised their families in. Many just want the security of their home. They don't care what it is worth, that worth is just paper gains, not REAL gains. Some neglect this fact. Selling your home and buying another is relative, to market forces and inflation. Those looking to profit from multiple properties are the ones that get the REAL capital gain, without paying tax! Many people don't consider their home anything more than an investment in happiness. Those people, young family people, retired people, all hard working people, are being forgotten. A family home is where we live, where we rest, where we nurture our families, not something to get rich from. Greed has corrupted our values.

"I can understand if you are retired, rates can be a bit more burdensome. If over 65 the DCC should offer the ability to defer rates on your property till it’s sold, it may be offered already."
Many will not feel very reassured by this. However most will tighten their belts even further. many over 65's aren't doing very well at all, do they need this worry? How will we feel when we get there? Life can throw some terrible blows.

If the board were made up of ‘‘people with a commercial interest’’, surely that is only going to result in the private sector doing it's best to syphon public sector money into the projects on the basis of "growing the economy".
I would prefer to see a board where the ORC and DCC are represented by people who are aware that the only people who will benefit will be the private sector.
Residential rate payers will not benefit by an increase in income (wages), or a decrease in living costs. In fact they are most likely going to see an increase in living costs if the project really does attract people to Dunedin.

Let the private sector pay for what will only bring a return to the private sector. This smells like the stadium all over again. Which by the way, can be talked about in this and many other contexts for as long as there is a massive public debt associated with it...