By George Block
1 Comment
An Otago second-hand dealer is defending his range of Nazi memorabilia and says he has sold several swastika badges since the Christchurch attacks.

The New Zealand Jewish Council said while it recognises the legal right of people to profit from Nazi memorabilia, it hopes they appreciate the suffering seeing such items causes vulnerable communities.

He said it was mostly imitation, including swastika badges and armbands, plus Waffen SS insignia.

He also offers military memorabilia from a host of other countries, including Allied forces, though toys are his biggest seller.

Among his most popular Nazi items were lapel badges bearing a swastika.

Three of the badges had been sold since the Christchurch terror attacks, he said. 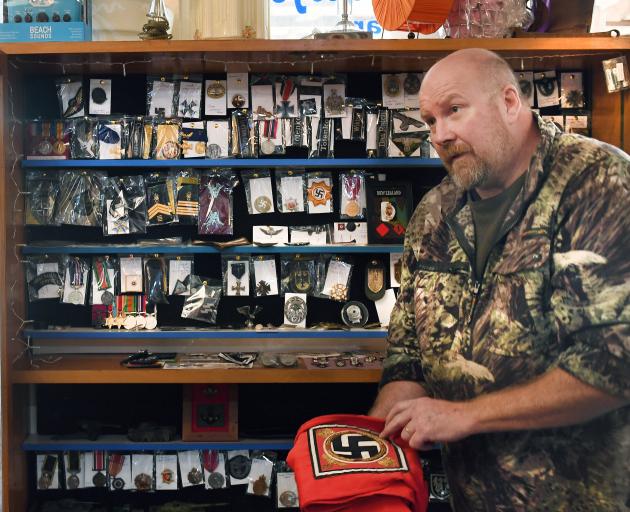 Holding a coffin sash bearing a swastika at his Palmerston shop, Barry White has no plans to stop selling his wide range of Nazi memorabilia. PHOTO: STEPHEN JAQUIERY

In the same cabinet as the badges was a large red coffin sash, again bearing a swastika.

Also available for purchase was the Skull and Crossbones insignia of the 3rd SS Panzer Division Totenkopf, or the "Death's Head" division.

It was responsible for several war crimes, including the mass execution of Jews in Poland, and the Le Paradis massacre, where they machine-gunned 97 British troops captured during a retreat.

Asked about the crimes of the Nazis, Mr White remained unapologetic.

"But did you hear how many Germans they killed? You never [hear] that. The winner writes the story."

He was adamant he did not hold Nazi views, despite his extensive range of Nazi wares.

Those who collected the memorabilia were mostly normal people and included soldiers, he said.

"Most of them are just normal people ... you wouldn't even know they had a massive collection at home.

"I've got mates [who] are soldiers [who] have a collection of German stuff, because the Germans were the best dressed."

New Zealand Jewish Council spokeswoman Juliet Moses said it recognised there was no legal prohibition on selling or profiting from Nazi memorabilia, and some people collected the items as a matter of historical interest or record.

The council hoped those collecting the items understood what they represented, she said.

"However, we do hope that sellers and purchasers are fully educated about the historical context, display and use these items responsibly, and understand the suffering that seeing them causes the Jewish community [and] other vulnerable communities.

"Especially, of course, the Muslim community in light of the March 15 atrocity - and indeed all those Kiwis who fought, or whose loved ones fought, to defeat the Nazis."

Mr White was told the views of the Jewish Council yesterday, but remained unapologetic for selling his Nazi items.

"However, we do hope that sellers and purchasers are fully educated about the historical context, display and use these items responsibly, and understand the suffering that seeing them causes the Jewish community [and] other vulnerable communities".

Do the hand wringers have the same problem with British and American memorabilia being sold?. I bet not.