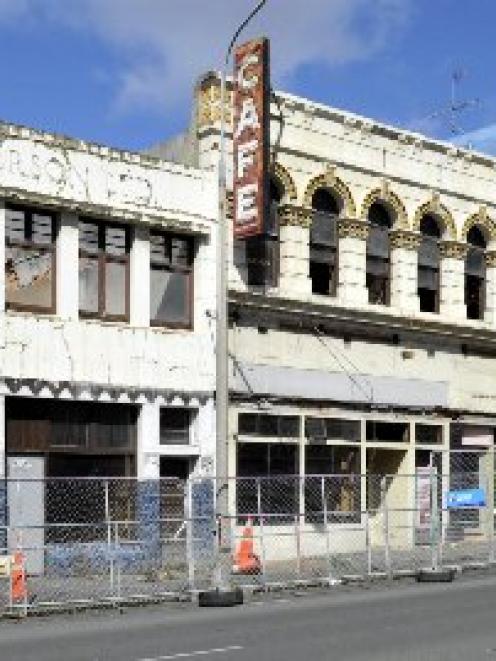 The N. & E.S. Paterson and Barrons buildings, demolition of which is set to resume soon, after the partial collapse of the latter in January last year. Photo by Gerard O'Brien.
Demolition work is due to restart soon on on two adjoining buildings in Rattray St, Dunedin, more than a year after the roof of one of them, the 136-year-old Barrons building, collapsed.

Stuart McLauchlan, a director of the Scenic Circle Hotel Group, which owns the N. & E.S. Paterson building beside the Barrons building, confirmed yesterday that demolition on the two buildings, which share a common wall, should begin within in the next few weeks.

But the Historic Places Trust says an archeological authority needs to be done, at least on the Barrons building, before any demolition work begins.

The buildings have been standing partly demolished, with the footpath outside them re-routed in part on to the street for nearly a year, after the roof of the Barrons building, the long-time home of Dunedin institution the Dragon Cafe, collapsed inwards and the top few floors of both buildings were removed to make them safe.

Mr McLauchlan said the section where the N. & E.S. Paterson building stood would be turned into a car park, and an entrance built with a facade similar to that of the other entrance to the car park, in High St.

Both buildings would come down at the same time, as they shared a common wall.

The delay in demolition had been caused by the need to remove asbestos from the N. & E.S. Paterson building, and the shortage of contractors after the Christchurch earthquakes.

Owner of the Barrons building Lincoln Darling said he had no immediate plans for the site, but intended to rebuild on it one day.

Historic Places Trust Otago-Southland manager Owen Graham said he was concerned to hear yesterday the buildings were to be demolished, as any further demolition would trigger the need for an archeological authority, at least for the Barrons building.

He had had several discussions with Mr Darling, including some in which Mr Darling agreed to salvage some plaster work and other pieces, as well as allow a photographic record to be taken before partial demolition commenced, Mr Graham said.

He had written to Mr Darling in September to remind him of the requirement under the Historic Places Act that the authority be completed before any further demolition work, he said.

Mr Graham said he hoped to speak to Mr Darling and Mr McLauchlan within the next few days.