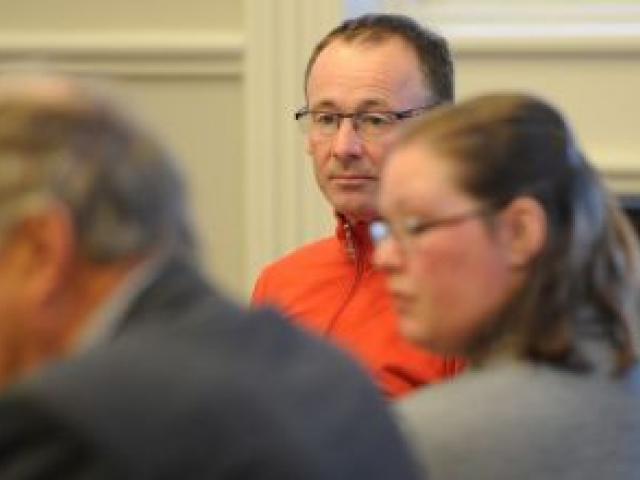 Developer Russell Lund listens during a Dunedin City Council panel hearing yesterday. Photo by Craig Baxter.
The would-be developer of a historic Dunedin warehouse has threatened to try to demolish the building if he is not granted consent to convert part of it into apartments.

But an international steel manufacturer based next to the building says if consent is given for the 24 apartments, the result could be the closure of the foundry and the loss of 39 jobs.

A Dunedin City Council panel yesterday started considering an application from Russell Lund to convert the top floor of the Loan and Mercantile building, in the city's industrial waterfront area.

More submissions on the negative impact of residential encroachment on the industrial area are expected from other businesses and the Otago Chamber of Commerce today, as the hearing continues.

During the 90-minute delivery of his submission - to Crs Andrew Noone, David Benson-Pope and Lee Vandervis - developer Mr Lund referenced Richard Nixon and the Bible, called the Chamber of Commerce, which opposes his plans, ''a disgrace'', and made emotional statements about the national significance of the building and the financial commitment he had made to it to date.

He would reluctantly accept consent conditions of a ''no complaints covenant'' on the apartments' titles and mechanical ventilation, so residents could close windows and still have air circulating, as ways to manage potential issues with noise - the fundamental concern of city planners and submitters who opposed his plans.

But Mr Lund reminded the panel he had a legal right to make a viable income from his building.

''To make this 100% clear: if this application is declined, I could seek, via the courts, to have this fabulous (DCC's term) building demolished the very next day, and without doubt, whatsoever, consent would be granted,'' he wrote in his submission, which he read to the panel.

''Our application would be very brief,'' Mr Lund said.

''... the council in the planning report have made our case for us by confirming the building has been empty for 40 years and functionally obsolete and there is no other viable economic use.

''We have no doubt the courts would reserve some harsh judgement to a council that ... (in a council minute) confirmed the building was obsolete and that the owner should be accorded special assistance to find a use for the building, then when the owner sought consent for a viable economic use - declined it.''

He gave the example of the category 2 listed Ashburton Railway Station, which was demolished when earthquake strengthening became uneconomic and there was no viable use to justify the spending.

''We want to reuse this building and see it preserved, but we can't do that if it's going to sit there without financial support, there's no other viable economic use, so why should I pay $50,000 a year for a building (on rates, insurance etc) that won't be used?''

In contrast, Esco Dunedin site manager Dean Taig told the panel if the apartments were allowed next door he would have ''grave concerns'' for the future of the foundry which employed 39 people and had plans to employ 100 people.

He was aware of problems residents could cause in industrial areas.

In Brisbane, 69 people lost their jobs last year after the Esco foundry closed.

It was closed largely because the company could no longer afford to continue investing in the plant to manage its effects following noise and odour complaints and issues resulting from nearby residential developments.

The company's Portland operation recently announced it was partially closing because of extra resources needed to operate a foundry in a shared location between industrial and residential areas, he said.

Esco counsel Daniel Clay said all port and industrial activities in the area would likely have to spend significant amounts to mitigate their currently acceptable environmental effects.

A no-noise covenant would not suffice because it was not practical to enforce, required intensive management, and others might complain on behalf of residents.

Most importantly, the existence of residents in the area would skew the subjective assessment of what sort of noise and other emissions were acceptable, ratcheting standards higher at the expense of businesses.

Co-locating industrial and residential growth impacted on industrial activities, he said ''This was the very concern identified in the Harbourside Plan Change, and [Mr Lund's] application crystallises the issues and concerns raised in that process, which resulted in the withdrawal of the plan change ...''

Esco was also concerned about the effect on the area of more traffic, and precedents, though Mr Lund had earlier said it was not reasonable to expect him to provide more parks than required for the development or to resolve other businesses' parking issues.

No precedent would be set as the council had already acknowledged the building was unique and in a unique location, he said.