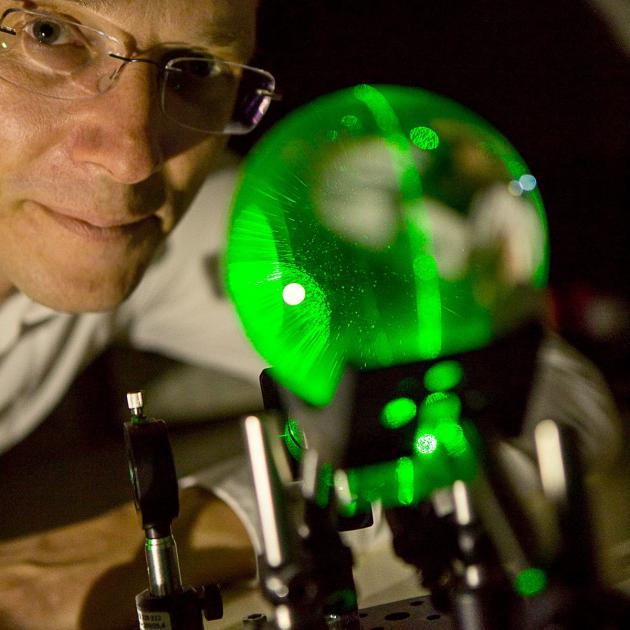 Dr Harald Schwefel, of the University of Otago physics department and Dodd-Walls Centre, with a glass object that illustrates the principle of storing light. PHOTOS: SUPPLIED
Dunedin researchers have developed a new device that harnesses the power of crystals to speed up the internet, outperforming two of the world's most prestigious universities.

The only other group in the world making devices of competing quality is a collaboration from Harvard and Stanford Universities in the US, but the University of Otago researchers hold the record for the most efficient device.

Prof Hutchinson is a University of Otago physicist who is the director of the collaborative Dodd-Walls Centre, at which principal investigator Dr Harald Schwefel and Dr Madhuri Kumari are based.

The researchers have created a small device, called a microresonator optical frequency comb, that could enable the next generation of faster, more energy-efficient internet.

Their breakthrough results were published in the world's premiere scientific journal Nature on Thursday.

Prof Hutchinson said the device, which had not been patented, was unlikely in itself to bring major economic gains to Dunedin.

But the high calibre of Dr Schwefel's research and that of other scientists at the centre was further boosting the international reputation of Otago University, and of Dunedin as a key tertiary education centre. 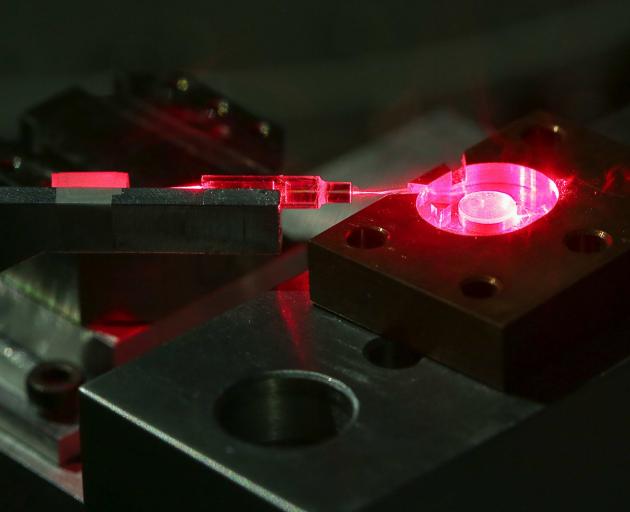 A tiny crystal disc, visible at right, is part of an energy-saving device which could help revolutionise the internet.
Leading postgraduate students were also being attracted to Dunedin from throughout the world.

Twenty-two of the 41 physics students who graduated from the centre last year with doctorates or other postgraduate degrees had already gained jobs in New Zealand, and were part of the country's burgeoning technology sector, Prof Hutchinson added.

German-born Dr Schwefel said the internet was one of the single biggest consumers of power in the world.

There was huge pressure to find new solutions to increase the speed and capacity of the internet, given that data capacity was expected to double every year, and "the physical infrastructure used to encode and process data reaching its limits", the researchers said.

Dr Schwefel and Dr Kumari have undertaken research that had contributed to developing a microresonator optical frequency comb from a "tiny disc of crystal".

This device transforms a single colour of laser light into a rainbow of 160 different frequencies-each beam totally in sync with each other and perfectly stable.

One such device could replace hundreds of power-consuming lasers currently used to encode and send data around the world.

Dr Kumari said lasers emitted only one colour at a time, and if an application required more than one colour "you need many lasers".

But the idea of the new devices was that "you launch one colour into the microresonator [and] a whole range of new colours comes out," Dr Kumari said.

The work was born out of Dr Schwefel's previous research at the prestigious Max Planck Institute in Germany and his collaboration with Dr Alfredo Rueda, who undertook some preliminary research.

Dr Schwefel expects the devices to be incorporated in sub-oceanic telecommunications landing stations in less than a decade.

To develop the device for the telecommunications industry, the Otago researchers had already started collaborating with New Zealand-based optical technology company Coherent Solutions.

The research project has been awarded nearly $1 million of Marsden Fund money to develop and test the potential of microresonator frequency combs.