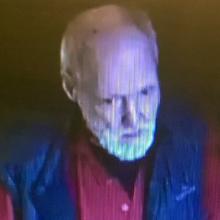 Gordon McLean
A full review is to be launched into how a “frail” man was able to leave the rehabilitation unit at a Dunedin hospital and go missing this week, the Southern DHB says.

Gordon "Gordy" McLean has been missing since about 3pm on Thursday when he left Wakari Hospital, and despite a search team of about 60 people combing the city and waterways, he has not been found.

The 63-year-old has schizophrenia and dementia.

Dr Strong said McLean left the rehabilitation unit in which he was receiving care on Thursday.

“Our focus at this stage is on working with the police and we thank all those in the community for any assistance they can provide to the search.

“Mr McLean was resident in a non-secure facility, however we will be fully reviewing the circumstances around his departure and care in light of these events.”

Searchers will broaden their hunt for Mr McLean today after failing to find any sign of him near the psychiatric hospital.

Police are concerned for his safety, and believe he may have fallen somewhere.

A police spokeswoman said today LandSAR and Red Cross volunteers, a search and rescue dog and police would search further afield in Dunedin's town belt for him.

They would also continue to search in Wakari, Helensburgh, Halfway Bush, Kaikorai Valley and Frasers Gully, the spokeswoman said.

Dunedin residents were asked to check their backyards, sheds and under houses for him.

McLean is about 152cm tall and has a very thin build. He was last seen wearing a dark-coloured polar fleece and trousers, a red polo shirt, brown slippers and a black puffer sleeveless jacket.

Any sightings of Mr McLean should be reported to police immediately on 111.