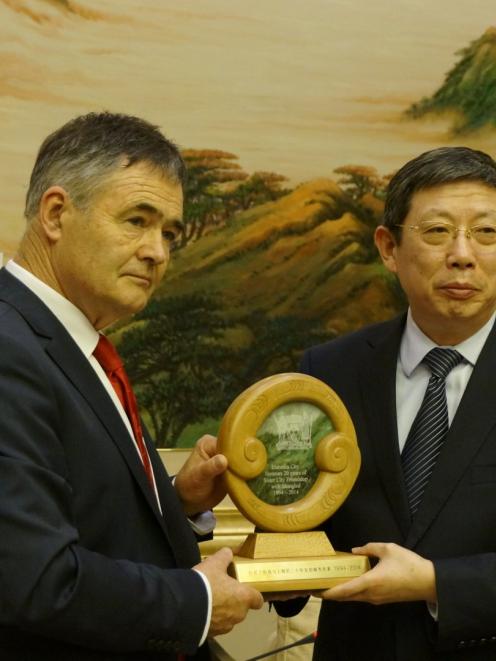 Dunedin Mayor Dave Cull presents a pounamu, kauri and rimu carving to Shanghai Mayor Yang Xiong to mark the 20th year of a sister-cities relationship. Photo supplied.
Dunedin could be in for a boost from China, with more students, tourists and investors on the way, the mayor says.

The increasing activity is expected to be the result of a recent two-week trip to Qingdao and Shanghai, in China, by an 11-strong Dunedin delegation headed by Mayor Dave Cull.

The city's civic, educational, cultural and business representatives returned to Dunedin with freshly inked agreements signed with their Chinese counterparts.

The trip was estimated to have cost $70,000, with the Dunedin City Council expected to pay between one third and half, once all invoices were in, council staff confirmed.

But the benefits were already starting to flow, including confirmation last week a Qingdao business delegation would reciprocate with a visit to Dunedin by the end of the year, Mr Cull said.

The group would be in search of new investment and business opportunities, and their visit reflected a strengthening relationship between the two cities, Mr Cull said.

Dunedin has an economic co-operation agreement with Qingdao, a coastal port city with a catchment of about eight million people, signed last year.

Mr Cull said the deal was likely to open doors and would help exchanges in new sectors, including education, tourism and health.

''I see it as pretty significant ... they [Qingdao] mean it to be implemented.''

Dunedin tourism and education sectors are also expected to receive a boost from MoUs signed during the trip.

That included a deal between Enterprise Dunedin and the Qingdao Tourism Bureau to encourage tourism operators in both cities to include the other in itineraries.

The deal, and a series of events staged in Shanghai, aimed to promote Dunedin and the wider region's potential as an international student destination, Mr Cull said.

The University of Otago and Otago Polytechnic also signed relationship-building agreements with their Chinese counterparts, while Taieri College became the latest Dunedin school to sign a sister schools agreement.

The aim was to encourage collaboration, which could include talks on on-hold plans for an aquarium in Dunedin.

Mr Cull said the delegation was an important part of relationship-building in China.

He, in turn, described Dunedin as the most engaged of Shanghai's 70 sister cities - the significance of which should not be underestimated, Mr Cull said.

''[Shanghai] is going to be one of the dominant cities, worldwide, of the 21st century, and our interaction with them is increasing exponentially.''