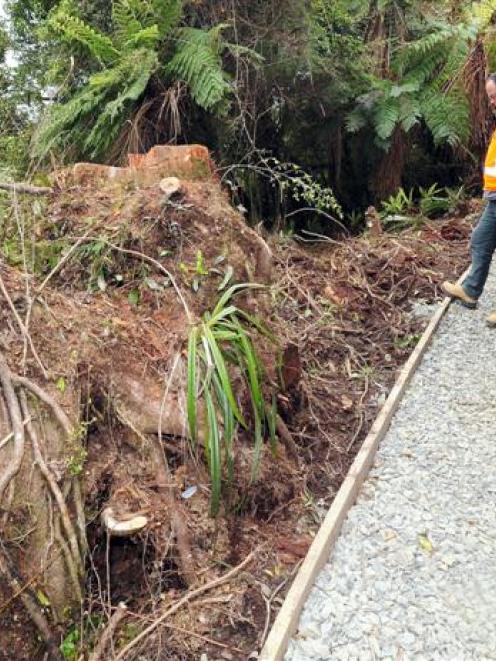 Doc visitor and historic assets visitor assets programme manager Bill Wheeler looks at the unfinished Leith Saddle Track where trees were mistakenly felled and the track misaligned. Photo by Craig Baxter.
Native cedar trees in a "regionally distinct" cloud forest remnant have been mistakenly felled by the Department of Conservation during a major upgrade of the Leith Saddle Track, forcing an apology from Otago conservator Jeff Connell.

During the construction work, Doc staff felled a mature broadleaf and a live New Zealand cedar.

This occurred despite Doc telling interested parties that no canopy trees would need to be felled.

''From a conservation point of view, this is a city icon, our northern entrance guarded by [a] stand of cedar.

''It is distinctive," he said.

Mr Connell, who was also concerned that the agreed route was not followed, apologised for the way it was handled.

"I am concerned that the department has not lived up to its primary mission of protecting New Zealand's natural heritage.

''I am not satisfied that the tree felling was necessary."

''The on-site concern was that there could have been safety issues for staff during construction and for track users in the future, he said.

"These matters needed to be discussed with other parties, and weren't.

''And because the trees were removed before any consultation, it's not possible to be certain whether or not the correct decision was made."

Forest and Bird Dunedin branch committee member Alan Mark, who approved the project on the basis none of the dominant trees were disturbed, said it was a "tragedy" the cedar had been felled, as that type of forest was rarely found so close to an urban centre.

While he had not seen the damage, he was extremely disappointed.

"It should never have happened," he said.

Dunedin City Council resource consents manager Alan Worthington said the council would review the situation in relation to Doc's consent for the work and decide what to do to from there.

Mr Connell said Doc would complete the work it had started, removing the material cut down.

"What is prudent to do now is to stick to the zone of disturbance created.

''In due course nature will heal the wounds."

He would not discuss any possible disciplinary action except to say it was an internal matter and Doc would carefully examine the roles played by people involved.

The key objectives in the Leith Saddle Track upgrade were to provide a better walking track, with a better surface, on a better grade, he said.

The latest technology was being used, which incorporated a base layer of geotextile cloth, a plastic geogrid for strength above that, covered with 100mm of drainage metal/gravel for the walking surface.

"It also has a much longer life span than a boardwalk, with less maintenance and blends in with the environment better."

The Leith Valley track was closed while the work was being done.

It was hoped it would be reopened by the 2009 anniversary weekend.