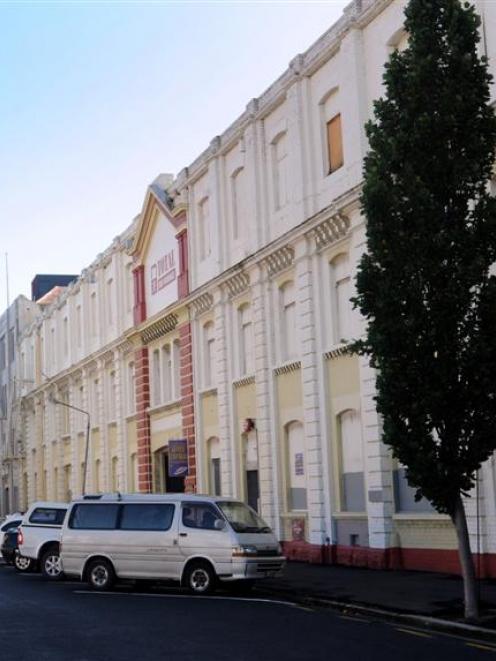 Heritage buildings in Dunedin, around Vogel St, including the former Donald Reid warehouse, and other areas, should be considered as a new home for students, it has been suggested. Photo by Peter McIntosh.
Housing for students or the perfect home for a local government institution?

Students could live there:

Mr Graham told the Otago Daily Times the largely empty warehouses in the area around Vogel St could be adapted for use as a future "population base" for students sick of North Dunedin's sometimes squalid flats.

The university had previously indicated an unwillingness, to keep its operation "pretty central"; but Mr Graham believed heritage buildings in the area south of Queens Gardens could make ideal apartments.

"To me there's an opportunity that the university might be missing there, that some students that may have got past their first- and second-year squatty flats, and may actually want something different."

An influx of students or other residents would also help launch revitalisation of the area, including Princes St and the Exchange, as would the planned development of the former chief post office into a hotel, he believed.

"By having a population base that's then going to generate demand for the kinds of retail services a small population needs.

"I think that would bring the south end of our main street back to life."

Public transport could provide links to the campus, although the distances involved would not prevent walking either, he believed.

Such a move would require buildings such as a the vast former Donald Reid warehouse to be adapted for a new use, but would provide the "next turnover" for the area, he believed.

"We just sometimes throw up the obstacles quicker than we look for solutions," he said.

University director of accommodation services James Lindsay dismissed the idea when asked for comment, saying in a statement the convenience of location was "very important" to students.

"Accordingly, we have centralised our accommodation around the immediate north side of campus, with some accommodation close by to the south. Easy walking distance to the campus and library facilities is a key consideration."

The university offered short-term hotel-style accommodation for visiting academics through its executive residence, but not extended accommodation.

It was left to individual departments to help visiting academics find private accommodation, he said.

Calls for local government institutions in Dunedin to make use of heritage buildings have not been ignored by city leaders, and a building such as the former Donald Reid warehouse could be an option considered if the Otago Regional Council moves from its Stafford St headquarters.

A major problem facing Dunedin's heritage buildings, an issue noted by many who work in the heritage area, is the city has a glut of buildings, but the supply of potential users is in inverse proportion to that oversupply.

If there is not the demand from private enterprise in the form of business or apartment development for the buildings, developers have asked, why can't the other major employers in the city - government and councils - make use of heritage stock rather than build anew?Mark Wallace, who redeveloped 73 St Andrew St, said the University of Otago had gone down that track, but he questioned why the regional council, in particular, could not consider a heritage building for its new headquarters.

That idea was raised when both councils considered a move to the former chief post office building in the Exchange.

In 2009, the Dunedin City Council confirmed it was investigating moving the Dunedin city library to the building, and the Otago Regional Council said it was considering using it for its long-mooted move from its Stafford St headquarters.

The purchase of the building by Distinction Hotels owner Geoffrey Thomson in May last year scuppered those plans.

Asked about the idea, regional council chairman Stephen Woodhead said the process for assessing the need for a new headquarters had recommenced.

After that, if a decision was made to go ahead, the council would consider if the headquarters should be in Dunedin, the Taieri, Alexandra or elsewhere.

"Then sites will come up.

"At that stage all options would be looked at."

"That [heritage buildings] may be one option looked at."

Dunedin Mayor Dave Cull said he was "sympathetic" to the idea, which had been brought up by building owner Ted Daniels during meetings of the heritage buildings economic re-use steering committee.

While the library move to the former chief post office was the only idea of that sort that had been raised so far, use of heritage buildings was in the mix of considerations of the steering committee.