Sand dredged from Otago Harbour could be used to replenish Ocean Beach, a consultant has suggested. 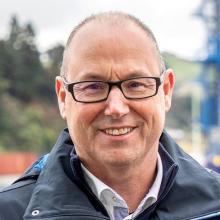 Kevin Winders
ECoast stopped short of recommending such action, but noted material dredged from the harbour to maintain access for container ships was a potential source for renourishment of the beaches from St Clair to St Kilda in Dunedin.

Nourishment schemes are among several options discussed by the consultant — others included groynes, breakwaters and reshaping dunes — after an examination of sediment movement on the South Otago coast, stretching from Nugget Point to Cape Saunders.

The Dunedin City Council is formulating a plan for managing the coast at Ocean Beach, and challenges there include the St Clair sea wall being prone to damage from storms, erosion near the wall and the risk of an old landfill under Kettle and Marlow Parks becoming exposed.

Modelling indicated the Moana Rua Rd area was probably a "hinge-point" — where sediment was transported away in both directions along the coast — and it was likely the most vulnerable part of the beach, eCoast found.

ECoast found nourishment could form part of an effective response.

It will also deposit sand at Te Rauone Beach, where rock groynes are expected to retain the material.

Port Otago chief executive Kevin Winders said he had heard the suggestion of replenishing Ocean Beach with material from the harbour before, but doing so in large quantities could be a major project or relatively costly.

The consultant also highlighted about 45millioncum of material had accumulated behind the Roxburgh Dam and taking sand from Sandfly Bay was "plausible".

ECoast was seemingly unconvinced groynes would be effective.

Dunedin city councillor and groynes advocate Cr Jules Radich said a series of wooden poles had worked brilliantly in retaining sand at St Clair in the past and the consultant’s commentary gave him cause to doubt it had adequate local understanding.

Fixing the structure, which was allowed to fall into disrepair about the turn of the century, would be an inexpensive experiment and much more cost-effective than continuing to hire consultants that recommended further study, Cr Radich said.

"The groynes enabled the beach to build up for 100 years," he said.

"The report highlights the influence that dams on the Clutha River have had on sediment delivery to the coast," he said.

Further technical work and monitoring would be required to develop a deeper understanding of the area.

ECoast said modelling supported by field data was the best way to develop a long-term solution.

Full-scale experiments were not recommended.

Consideration of potential effects from sea-level rise would need to be part of any strategy, the consultant said.

The council’s draft coastal plan document will be available for public feedback before the end of the year.

"Dunedin city councillor and groynes advocate Cr Jules Radich said a series of wooden poles had worked brilliantly in retaining sand at St Clair in the past and the consultant’s commentary gave him cause to doubt it had adequate local understanding".
Why not at least try this idea, no doubt the seat polishers want to spend exorbitant amounts of money on fantastical schemes and charge mega bucks for it.

Beach users at St Clair know that the sand erodes in winter and returns in summer.

There might be less sand at the mouth of the Clutha but there is no evidence of any less offshore at St Clair and sand is still returning to the beach. Groynes held sand on the beach, so let's repair the remaining poles and let the sea do the work of replenishing it for us.