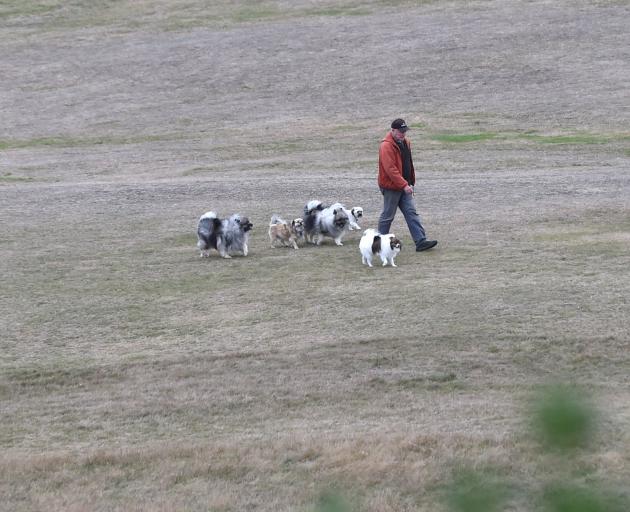 Jeff Parker, of Dunedin, walks his four dogs and one for a friend across a dry Chisholm Park yesterday. PHOTO: PETER MCINTOSH
A drought classification in Otago has not sparked a flood of calls to a support hotline, the Otago Rural Support Trust says.

Agriculture and Rural Communities Minister Damien O’Connor announced the Government was expanding its drought support to include Otago, South Canterbury and Mid Canterbury from April 28.

The Government also announced it would give another $900,000 to provide support for farmers affected by drought across New Zealand.

The new funding would continue feed support services and wellbeing assistance for the affected farmers, he said.

“Recovery and resilience co-ordinators will be employed to help co-ordinate support between Rural Support Trusts and industry groups, enabling affected communities to bounce back more quickly."

Trust co-ordinator Pat Macaulay, of Mosgiel, said Otago farmers battling dry conditions had not been calling the trust since the announcement.

Support was often needed after a drought classification was lifted, when farmers were affected by factors such as lower lambing percentages and the cost of buying replacement stock.

To reduce the effect of the drought, Mrs Macaulay urged farmers to make difficult decisions, such as selling stock, rather than retaining it and waiting for rain.

Generally, farmers would be better off financially by selling the stock now, rather than retaining it and buying "copious amounts of winter feed".

Supplementary feed was a "scarce" commodity at the moment, Mrs Macaulay said.

"Please make your plans, make them early and stick to them."

Farming through a drought was "not easy" and farmers needed to be "proactive"by making the "heart-wrenching" decisions.

Mr O’Connor encouraged farmers to contact the national feed planning service if they needed help to do a feed budget to get them through winter.

Support was available in Northland, Auckland, Waikato, Gisborne, Hawke’s Bay, Wellington and Tasman regions, and the Manawatu-Rangitikei, Tararua and Nelson until June 30, when it would be reviewed.