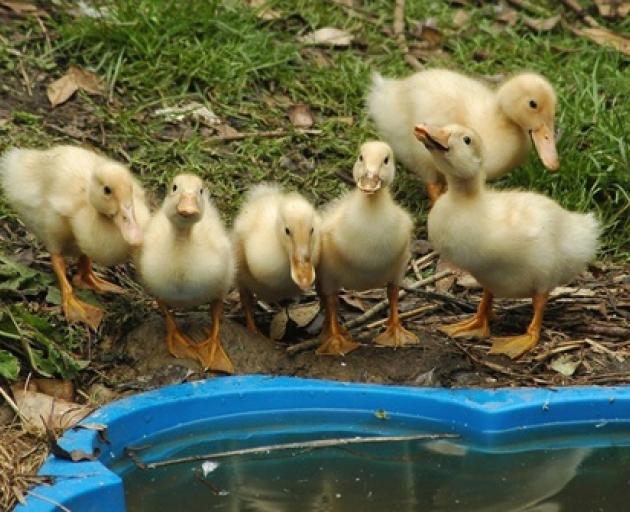 Six ducklings check out the water in a paddling pool. Photo by Colin Emslie.
This is a believe-it-or-not tale of a rather staunch wild brown mother duck and her brood, which defied attempts to repatriate them many kilometres away from Larnach Castle.

Early this year, a mother duck and her eight ducklings decided to make their home near a couple of the castle's ponds.

To get there, the mallards slipped past the castle gatehouse and elbowed their way in, uninvited, among the bigger, glossier, and much more officially favoured Peking ducks at the castle's Reflection Pond.

This pond is in the Green Room, a tranquil spot bordered by big green hedges and well-groomed lawns, and much favoured by gaggles of newly-wed brides, grooms and their photographers.

Because of subsequent concerns about lawn damage and duck droppings, a castle gardener, Chris Rickards, drove the wild duck and ducklings to his property high on Mount Cargill, near the Organ Pipes.

Seated in a box in his car, the ducks stuck their heads out from time to time and quacked and rollicked their way along to the music he was playing on his car stereo. Mr Rickards duly fed the ducks at his property, hoping they would stay.

But almost as soon as they arrived, they were gone, mother and five surviving ducklings - the latter not yet able to fly - turning up again back at the castle three days later.

Their remarkable journey, of more than 8km had involved a long hike down the rugged side of Mount Cargill, crossing fields, bush and at least one roadway, a brisk swim across Otago Harbour and a demanding climb back to the castle. Mr Rickards was greatly surprised to see the ducks back again after their perilous journey.

University of Otago zoologist Associate Prof Ian Jamieson, a specialist in forest birds, said the feathery tale was ‘‘quite remarkable in some ways''.

The ducks had demonstrated the impressive homing ability shown by birds and some other animals in finding their way back to a previously familiar place, in this case linked to good feeding prospects.