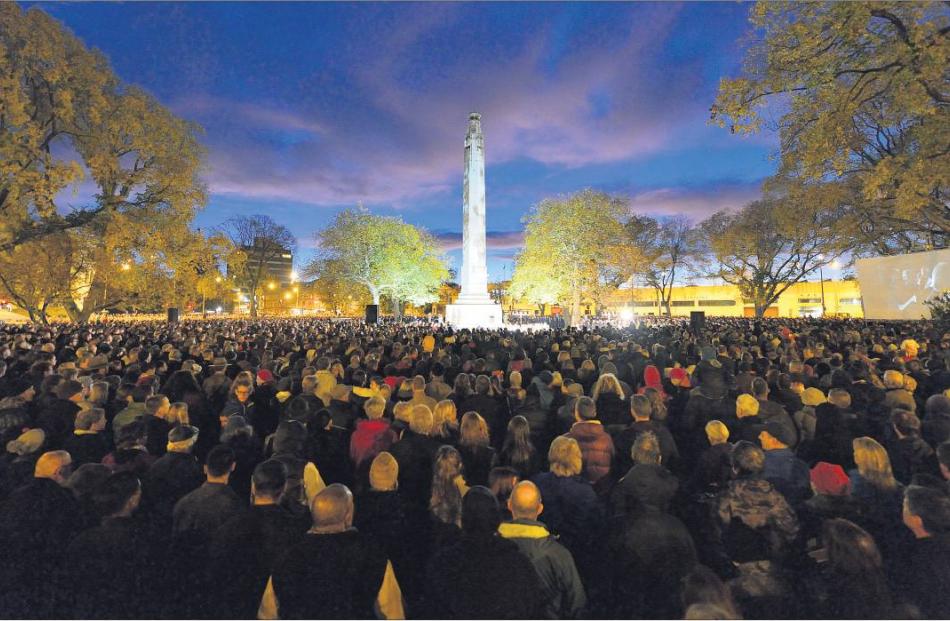 As dawn broke on Anzac Day, blood-red clouds coloured the sky over Otago Harbour, illuminating the path Otago's sons travelled - many to their deaths - more than a century ago.

As the Last Post rang out across the crowd gathered at Dunedin Cenotaph, the clouds took on a sandy hue. With the backdrop of a blue sky, the scene above was reminiscent of the ocean washing clean Gallipoli's bloodstained beaches.

That deadly campaign, which caused so much grief, has been forgiven but never forgotten.

Up to 20,000 people, an unprecedented number, crowded into Queens Gardens and the surrounding streets. The throng extended along Crawford and Dowling Sts and people pressed against nearby windows and gathered on rooftops.

‘‘The First World War was one of the most significant events in New Zealand's history, leaving a dramatic impact on those who served and those who followed,'' the Rev Dr Tony Martin told the crowd.

But, as with any conflict, there were two sides and New Zealand's enemy at Gallipoli, Turkey, was remembered and treated as a friend at the service.

‘‘Turkey was also significantly impacted by the war and we acknowledge that today,'' Dr Martin said.

The Dunedin RSA Choir sang Turkey's national anthem and the country's flag stood alongside those of New Zealand, Australia and the United Kingdom. It was lowered alongside them to acknowledge Turkey's sons had fallen alongside Anzac troops.

Commander joint forces Major-general Tim Gall said New Zealand, unlike most countries, did not commemorate a military victory, but instead a decisive defeat; one that heralded New Zealand's involvement in a conflict that ultimately accounted for nearly 2% of the country's then population.

‘‘Young men came together from communities all over New Zealand, leaving what they knew and held dear to travel to the other side of the world and face the unknown,'' he said.

‘‘Think of all those who served. Whether they came home with the tide or lie underneath the soil on the other side of the world, they were and always will be the sons and daughters of New Zealand.''

‘‘You, the mothers, who sent their sons from faraway countries, wipe away your tears; your sons are now lying in our bosom and are in peace,'' Dr Genc recited.

‘‘After having lost their lives on this land, they have become our sons as well.''

Following the service, hundreds thronged to the cenotaph to lay wreaths and poppies.

Otago Regional Council chairman Stephen Woodhead said the number of people who paid their respects at the cenotaph after the service was unprecedented, and it was ‘‘quite moving''.

An estimated 1850 soldiers from Dunedin died during World War 1 - the city had a population of 69,000 at the time - but the full toll on Otago and Southland was impossible to calculate.

Up to 20,000 men served with the Otago Infantry Regiment, but unknown others served in other regiments and with other countries' forces.
Mr Cull said the toll the war took on the area lasted for generations.