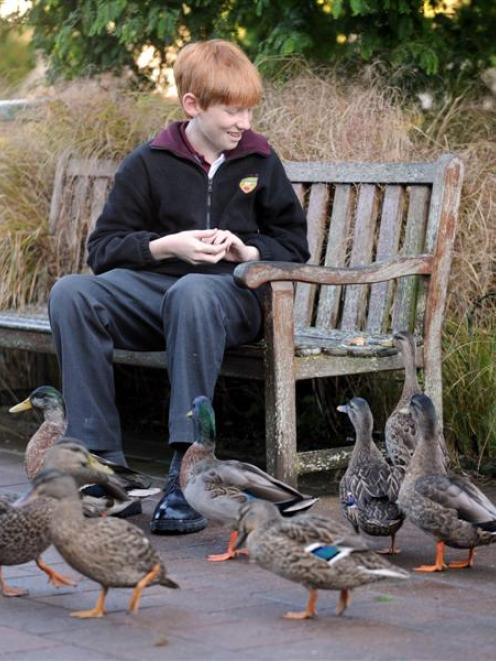 Rhian Gaffney hopes his study of ducks in the Northeast Valley will help improve the survival rates of Mallard ducklings. Photo by Stephen Jaquiery.
A walk in Rhian Gaffney's Northeast Valley, Dunedin, backyard leaves most of its occupants in a flap.

That is because the 14-year-old Logan Park High School pupil has accumulated about a dozen families of Mallard ducks and has been studying their duckling-rearing methods for the past three and a-half years.

His project, nick-named Jemima Puddleduck Syndrome, began in 2005 after the family dog died and the ducks started waddling up to the family's back lawn from the nearby Lindsay Creek.

Rhian said he did not know why the ducks arrived, or why they decided to stay.

But because of the global decline of many common bird species, he made the most of the opportunity to study the factors which influence duckling survival rates.

In particular, he focused on maternal experience, and specifically older versus younger females.

He concluded there was little evidence to suggest ducks learned how to rear their ducklings more successfully from year to year, and survival rates were quite low.

His study has won three Auroroa Otago Science and Technology Fair awards and was nominated for the Realise the Dream Science competition in Wellington last year.

Rhian said he hoped Northeast Valley residents would let him know of any other large flocks of ducks in the area.

He planned to include them in his study in the hope his research may help improve survival rates.