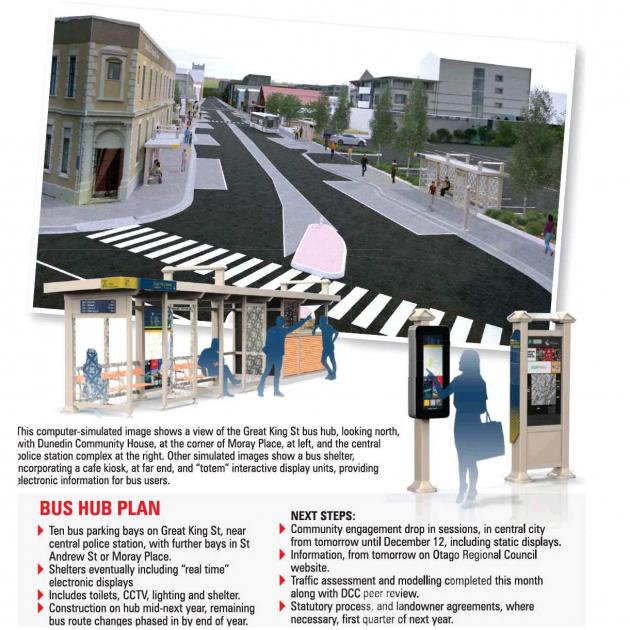 The bus hub, also termed the "bus interchange", is,  as previously signalled, in  Great King St, near the central police station. It includes five parking bays on each  side of the street.

The size and style of bus shelters are partly dependent on public feedback, and also on any negotiations required with owners of  nearby land, to be undertaken early next year.

It is also proposed to use  paints or other coloured materials, including on part of the street, to give the hub area a more lively appearance.

The  hub is a key part of a  $3million transport project, including "super stops". Most or all  the 38 car parks on both sides of Great King St  between Moray Pl and St Andrew St will be replaced by the bus bays.

The first key transport change occurred on July 1 last year when a more direct "southern routes" service was introduced, providing an express bus service to central Dunedin, via a Green Island "super stop". This move brought  benefits for some bus users but  sparked criticism from others, including the Greater Green Island Community Network, which called for direct links between Green Island and South Dunedin to be restored.

Council chairman Stephen Woodhead said the council was keen for peopleto have  input into its layout and design.

He hoped that manywould "come and chat to our transport team" at a series of planned drop-in sessions at the Dunedin Civic Centre lobby, starting tomorrow. These "drop-in" feedback sessions will run from 10am to 2pm every day  until  next  Monday,  except for this Thursday’s  session (2pm to 6pm).

Proposed hub details and images will be exhibited in  the lobby from tomorrow  until next  Monday,  with a simulated "drive-through" display.  Further information will also be available online from tomorrow  at www.orc.govt.nz/bushub, and there is an online feedback form.

Consultation  ends on December 24.The bus bays will be created through raised kerb "build-outs" into the street. Entry to the Dunedin Community House car park, at the corner of Moray Pl and Great King St, will switch to Moray Pl, with the Great King St entry closed.

Bus shelter design options provide  views of oncoming buses, and some larger options provide for a coffee kiosk in part of the shelter, where hot drinks will be available.

A warm waiting area, and cycle storage facilities are among a host of possible options. ORC manager, support services, Gerard Collings, said  having 12 bus bays in the block was initially  proposed, but simulation work, including  off-site trialling, showed resulting "conflict" between traffic, with some buses crossing the centre line and some car drivers facing potential visibility issues.

It was at present "really hard" for bus users to grasp how to access connecting services.

Who designed this?
Any landscape architect would start by asking for community and professional input first- then do the design, not afterwards. This looks like it's come straight off the internet by an untrained eye. It is so wrong on so many levels. Here's hoping this project is handed over to the professionals. Dunedin deserves so much better.

ORC still has a policy of providing 'direct' routes everywhere. This is simply unworkable - it will always result in worse and worse congestion in the central city because of the North South geographical layout of central Dunedin. Sure, a bus interchange like this is a step in the right direction. But, without a central city George St shuttle to conveniently and quickly transfer to and from, it's pointless. I suppose the shuttle could come after the interchange has been built. Then it might work.

Dunedin should not even consider a bus hub unless it is enclosed and warm. Who wants to wait in the cold and wet southerly? Better to take the car. This plan will certainly not boost bus patronage.