The sound of a 25 pound gun echoed through Dunedin’s central streets, marking 106 years since the Anzacs landed on the shores of Gallipoli.

Thousands gathered at the cenotaph in Queens Garden on a cold autumn morning for this year’s Anzac Day dawn service.

It was a different picture to last year, when New Zealanders had to pay their respects from their letterboxes and lounge rooms during the Covid-19 Level 4 lockdown.

The Dunedin Anzac address was given by New Zealand Defence Force Colonel Kate Lee, who remembered the men and women who served and honoured those who continue to keep New Zealanders safe. 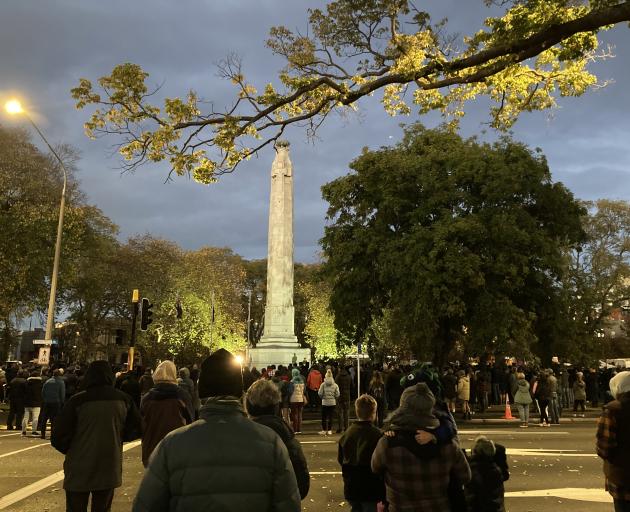 People gather around the cenotaph in Queens Gardens this morning for the Dunedin Dawn Service. Photo: Stephen Jaquiery

‘‘This morning we gather here together at dawn, a sacred ritual that was first commemorated on the 25th of April 1916 — one year after the fateful landings on the shore of the Gallipoli Peninsula.

‘‘On that Anzac Day, Australians and New Zealanders gathered in their communities to mourn the horrific loses at Gallipoli.’’

In 2021, New Zealanders continued to serve with honour and loyalty, she said.

‘‘Significantly this year, our service people, up to 1200 at any one time, continue to work on our borders supporting the New Zealand response to the Covid-19 pandemic.’’

Lieutenant William Atkinson took a moment to commemorate the recent death of the Duke of Edinburgh, Prince Phillip, honouring him as the ‘‘epitome of service’’.

Wreaths were then laid before the sky began to glow a bright pink and orange as the Last Post sounded.

Security was similar to previous years, with main roads leading to the Cenotaph blocked off and a police presence in the area.

In Andersons Bay Cemetery, posies with sprigs of rosemary were laid on the graves of fallen soldiers by about 30 girl guides, brownies and scouts.

About 400 people, mostly families, attended the Anzac Day post laying ceremony in the services section of the cemetery, which began at 9.30am.

The New Zealand National Anthem was played by The Kaikorai Metropolitan Brass band.