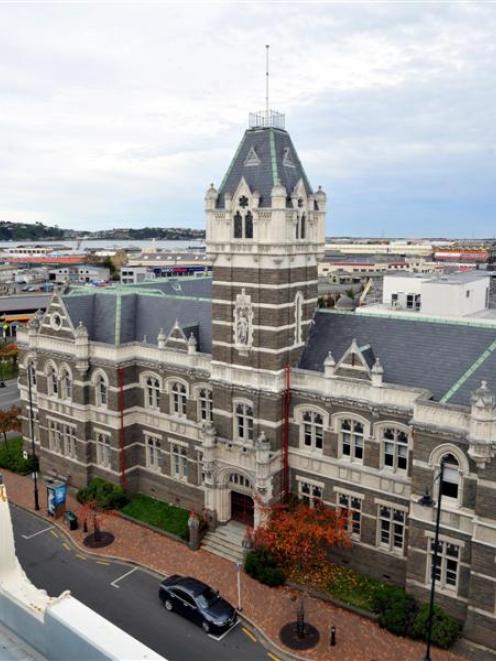 Dunedin's 1902 courthouse will be upgraded to new earthquake standards. Photo by Craig Baxter.
The Ministry of Justice will spend millions upgrading Dunedin's historic courthouse, much to the delight of the city's legal fraternity.

''This building represents the roots of the legal profession in Dunedin and many lawyers have spoken to me in the past 18 months about their strong attachment to it,'' she said.

The main part of the category 1 heritage building, built in 1902, has been closed since December 2011 after an engineer's assessment found it to be unstable.

The ministry confirmed yesterday it was in the final stages of getting approval for the courthouse earthquake-strengthening work, set to go out for tender later this year.

The former CIB building in Dunbar St, housing coronial services, would also be closed during that time and operations transferred to John Wickliffe House. Prof Buckingham said lawyers were happy to move temporarily from the courthouse in the knowledge they would return, and had been working hard to make interim arrangements.''

The certainty that this announcement gives us will make that ongoing process far less stressful because we know it is finite.''

The courthouse was ''more than just a beautiful building'', she said.

''It's a symbol of commitment to the administration of justice.''

The ministry said it was too early to know exactly how much the project would cost.

Estimates based on previous engineering reports suggested an upgrade in line with new Building Act requirements could cost anywhere between $3 million and $10 million.

The ministry spent about $10 million refurbishing the stone masonry courthouse in 2001, when part of the building to the south was demolished and a new three-storey annex building constructed.

Earthquake-strengthening during the upgrade was limited to non-invasive ''securing works'' which brought everything but the Stuart St tower up to minimum standards of the time.

The tower was strengthened in 1993 but the work did not extend to the ground floor, which meant it was not up to standard overall.

When engineers assessed the courthouse in 2011 they found the tower was likely to topple in a moderate earthquake, and outside parapets and ornaments were also unstable.

If the tower collapsed, it would likely damage the courthouse's main entrance foyer, reception, public toilets, courtrooms 1 and 2, the judges' lounge, chambers and law library.

At the time, it was estimated the minimum required strengthening work could be done for $650,000, and the entire courthouse could be upgraded beyond the minimum standard for $3.5 million - an option engineers recommended.

Opus estimated the cost of upgrading the courthouse to Importance Level 3 under the Act (as recommended) was about $10,000 per square metre of gross floor area, excluding GST.

Eventually, full court operations will return to the historic courthouse, but in the meantime civil and family hearings will continue to be held in John Wickliffe House.

Jury trials will be held in a High St building, being refurbished by the ministry to comprise jury rooms and cells, at an initial cost of $3 million.

The temporary courthouse was expected to open in July and be expanded to accommodate a list court and youth court, at additional cost to the ministry.

It had already spent $660,000 relocating the civil and family courts, as well as thousands of dollars extra on travel costs for those involved in criminal trials, who for more than a year had to make the 440km round trip to Invercargill.

The ministry had also spent more than $30,000 assessing whether the courthouse could be retained and for how much.

Court staff and the judiciary were informed about the ministry's plans for the building this week.

Minister for Courts Chester Borrows said it was ''great news''.

''It's been a tough road but I'm very pleased with the way the ministry has handled the disruptions to court services over this time.''

He thanked all those affected for their patience and support.