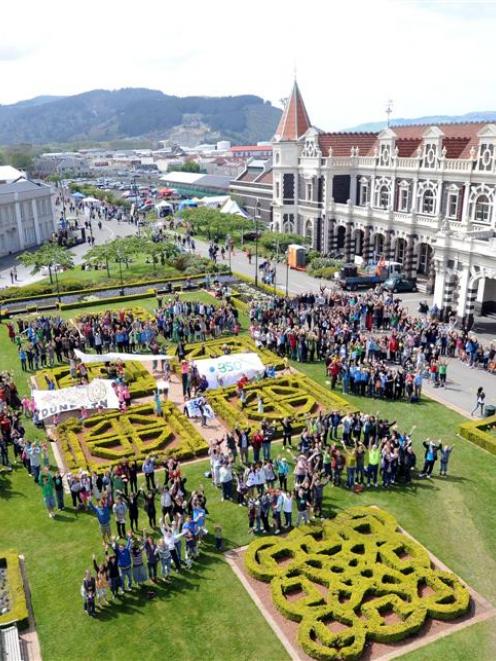 350 is spelled out in front of the Dunedin Railway Station by people visiting the Spring Food Festival, which was organised as one of the 350 International Day of Action events in Dunedin on Saturday. Photo by Peter McIntosh.
Thousands of people flocked to the Spring Food Festival in Dunedin on Saturday, as part of the 350 International Day of Climate Action.

The festival was held in conjunction with the Otago Farmers Market.

Co-organiser Nick Holmes was delighted with the response to the market and festival.

"It's been awesome. We just wanted to celebrate the local produce and stuff and I think it has happened."

Festival stalls covered topics from beekeeping to solar water heating, and one invited people to "ask a scientist about climate change".

Free vegetable seedlings being given away by Students for Environmental Action proved popular.

Also announced at the festival were the Eco Hero Awards.

About 500 people gathered in front of the railway station at 1pm for a Dunedin 350 day photograph.

The event was one of more than 4000 held worldwide to encourage people to reduce carbon dioxide emissions to 350 parts per million - the atmospheric CO2 concentration some scientists say is necessary to halt global warming.

Earlier in the day, about 50 surfers paddled out at St Clair to form a circle to highlight the action day, and a skateboard competition was held from noon at the Thomas Burns skateboard park.

Churches throughout the city tolled their bells 350 times in support of the action day.

About 200 cyclists took part in the inaugural 350 Riders' Rally, which was led by Olympic mountain biker Kashi Leuchs and professional cyclists Anja McDonald and Justin Leov.