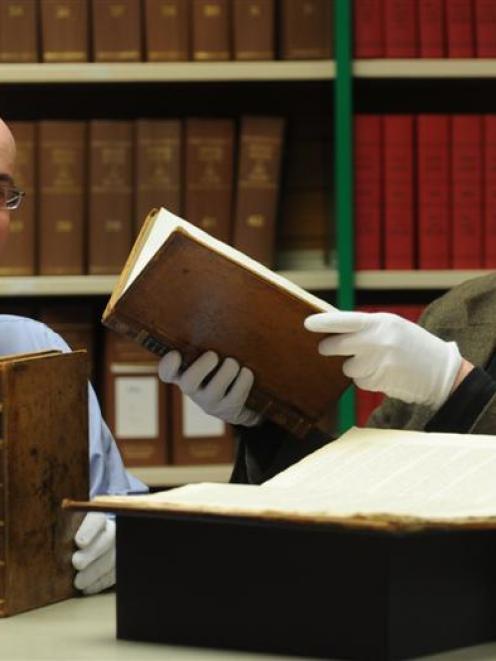 Dunedin Public Library rare books librarian Anthony Tedeschi (left) and University of Otago Johnson scholar Dr Paul Tankard with some of the Samuel Johnson books which will be on display at the library as part of Johnson's 300th birthday anniversary celebrations. Photo by Peter McIntosh.
If you look up "Samuel Johnson" in a reputable dictionary, you are more likely to find his name on the cover, rather than inside the book.

The 16th century literary identity is best remembered for writing the first scholarly and comprehensive English dictionary, published in 1755.

He was also a poet, critic, and essayist.

Dunedin will host an exhibition of rare volumes of his work and letters to mark the 300th anniversary of his birth.

University of Otago Johnson scholar and event organiser Paul Tankard said the exhibition, titled Samuel Johnson 1709-2009: Life and Afterlife, will be held in the Dunedin Public Library and will showcase more than 50 items from a collection of about 800 items devoted to Johnson's work.

The items were bequeathed to the library by A. H. Reed, a prominent early Dunedin publisher, book collector and Johnson fan, he said.

"Johnson's reputation spreads far beyond academia. He is not just a dead writer with a few specialists and academics interested in studying him," Dr Tankard said.

"All over the world there are clubs and societies devoted to him, and in many ways he's still a living figure, a vivid character with a very strong personality. His writings and conversation are among the most often quoted after the Bible and Shakespeare."

The public can visit the exhibition at the Reed Gallery, Dunedin Public Library, from tomorrow to November 1.

Senior research fellow in humanities Ken Smith will give two lectures about Johnson in the Burns Building at 4pm on September 8 and 9.

Dr Tankard himself will give a public lecture in the Burns Building on September 17 at 4pm.

Events will include readings and music, hosted jointly by Dr Smith and Dr Tankard, at the Skeggs Gallery, Municipal Chambers, on September 10.