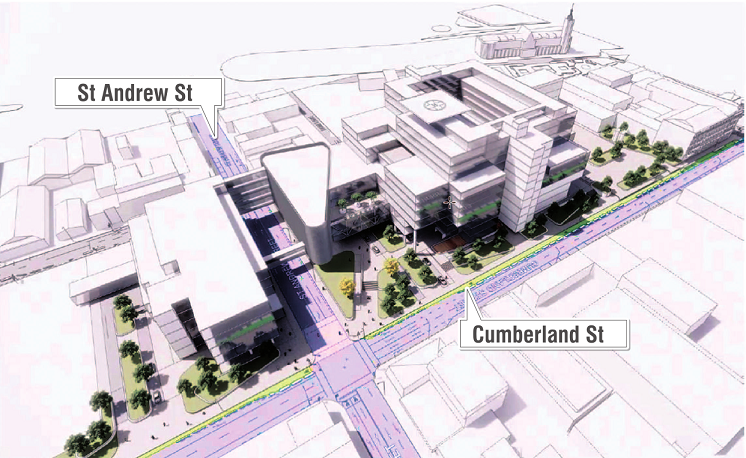 A draft illustration of how the building layout of the new Dunedin Hospital might look. Actual architectural drawings are not yet done. IMAGE: MINISTRY OF HEALTH
The Government's announcement a final sign-off for Dunedin's new hospital won't come until next year amounts to a "scandalous" delay in progress, National Dunedin candidate Michael Woodhouse says.

Mr Woodhouse's comments come after it was revealed today that Cabinet had signed off in principle on the development’s detailed business case for the hospital, with the full business case going before Cabinet for sign-off in February.

Health Minister Chris Hipkins has also confirmed what many have long believed, that the $1.4 billion project - the largest hospital build in New Zealand history - will cost more than that.

The detailed business case, the planning document which sets the shape of the new hospital and the services to be provided within it, has been keenly anticipated and long delayed.

It was due to be considered by Cabinet in March, but a combination of delays due to Covid-19 and fraught negotiations between clinicians and planners concerning the amount of square metreage in the hospital buildings have meant the plan’s release has been continually delayed.

Mr Woodhouse said the Government's announcement amounted to a further delay of four months and labelled it "unacceptable".

Mr Woodhouse said the project had been bogged down in conflict between clinicians, health officials and Treasury over the size and scale of Dunedin Hospital.

National MP Michael Woodhouse. Photo: Getty Images
"The very fact that they haven’t been able to approve the detailed business case suggests to me that Treasury are winning," Mr Woodhouse said.

"If that’s the case it’s not acceptable for the government to kick this can still further down the road, that is an outrageous abdication of their responsibility to the people of the south.

"They need to be upfront about what sort of hospital we are going to be getting, how big it will be, how much it will cost, and what services will or won’t be provided."

Mr Hipkins said yesterday approval in principle had been made to give people in the South certainty and confidence the project would go ahead.

Cabinet had approved a plan similar to the already public concept drawings with two buildings to be constructed, one on the former Cadbury factory site and one on the Wilson parking block, he said.

The Ministry of Health recently lodged a consent application to complete the demolition of the Cadbury factory, which is already under way.

Mr Hipkins said the Government now expected the total budget for the project would exceed the upper budgeted figure of $1.4 billion.

"This will be confirmed once concept design is finished and costings can be finalised," he said.

"The final details of the business case are expected go to Cabinet for approval by February 2021."

Pete Hodgson, chairman of hospital project steering group the Southern Partnership Group, has previously detailed some of the financial pressures in the early days of the development.

These have included ground conditions on the inner city sites being "uniformly bad", and geotechnical surveys returning results which meant the cost of building the hospital building foundations would exceed the budget.

Modelling has also revealed the ground floors of the hospital buildings would need to be much higher so they would remain operational in case of flooding.

Those cost pressures are understood to have led Treasury to question some aspects of the project.

In February, when appearing before Parliament’s health select committee, the Southern District Health Board said there had been "tension around the balancing of cost and affordability" but scotched a claim Treasury had rejected the business plan.

In June, the Otago Daily Times revealed both the Ministry of Health and the SDHB had recommended the project be scaled back from the publicly announced two-building plan to a single building to maximise "clinical efficiencies and functionality".

That proposal was rejected by the Government due to cost, timing and shading issues.

Mr Hipkins said siting outpatient services on the Wilsons block and inpatients on the Cadbury site would deliver a stronger separation of services and much-needed day surgery capacity earlier than other options.

"It also provides excellent linkages to the health sciences division of the university and avoids overbearing the heritage area of the city.

"It’s important we get this right. The new Dunedin Hospital will be world class and the biggest ever hospital build in New Zealand.

"It will have improved clinical capacity and digital technology, and more integrated services to support new models of care."

While the detailed business case is completed, planners will also be drafting implementation business cases for each building, which will set out how the project will be delivered.

"Each will be considered by joint ministers of health and finance, prior to confirming the main contractor for each building."

$127 million before it even gets out of the ground - "uniformly bad" and already a cost blowout, "in case of flooding" So they chose the wrong site? Go figure...

And I still don't see any parking allowed for in that drawing. Once again we will have monumental problems trying to park near this new building. $1.4 billion plus a blowout for what?

National will do and say anything to grab a headline, it seems. If Labour moved more quickly they'd be crying about lack of care, they try and spin a Covid-19 induced delay into some sort of failure, in their mind. This project is far too important and needs to be done right. Prudent management is not a failure!

The nats started this rebuild and labour has sat on their hands for the last three years. Just hopeless

In 2008 Key promised a rebuilt hospital within 10 years . In 2017 they were still promising the same thing having not even started the business case or allocated funding in the budgets. Since this govt entered , they have begun and progressed the business case to its' final stage, allocated funding , commissioned designs , acquired land without needing to resort to the public works act , began the demolition phase etc . All in less than 1 term .

There was only one party that sat on its' hands and it wasn't Labour.

Dunedin has been fed snippets of non-information for the past 18 months. No one cares if there is one or three buildings or how tall they are.
People want to know what services are going to be delivered in Dunedin and which patients are going to have to travel to Christchurch or Auckland for treatment. This is obviously still the major sticking point. Any delay of an announcement until after the election just means it is bad news for Dunedin's sick and ailing.
Mind you, if National MPs wanted to do anything other than score points, they would promise that all current services would be delivered in Dunedin for the next 50 years. But I bet we won't see that announcement anytime.

Oh, they'd announce it, but once they were in power they would keep tweaking the funding until there was a huge deficit, then blame the SDHB for the shortfall. Sound familiar?

"Modelling has also revealed the ground floors of the hospital buildings would need to be much higher so they would remain operational in case of flooding."
Lift it up, put a car park underneath and extend the outdoor area over the top of Cumberland Street so we keep our one way system and have pedestrian access to the CBD.
The total cost of this project must include any plans to redirect traffic if they changed the one way system back to two way. I'm sure this would cost more than building over the top of Cumberland St and creating a fantastic outdoor space close into the city. What's more, this is exactly what they do in flood prone cities such as Rotterdam.

I see a common theme developing. National put no importance on a new Dunedin hospital when they were in power for nine years. They were happy for it to be run into the ground. Now Woodhouse is outraged at delays to the project (a project he would never have even started under his watch). The sooner he disappears from the Dunedin political landscape the better.

Bit rich of Woodhouse to slam Labour for delays and cost blowouts. National under Key promised us a new hospital built within 10 years for $330ish million, that was back in 2008. By 2017 National had no business plan, no building plan, had not allocated funding in their budgets, had not acquired land etc and the $330 million had ballooned to over $1 billion.
In only 3 years since entering govt Labour has developed a business plan, a building plan, allocated funding in the budget, negotiated and acquired the land without resorting to the public works act, started demolishing existing buildings etc etc .
National don't have a leg to stand on in this regard. In fact when it comes to health services National fail in almost every aspect, the dragged out pay negotiations several years past the expiry date leaving it for Labour to resolve; they made no effort for the rebuild; they removed the democratically elected board despite appointing some seats themselves and having oversight since the merger with Southland. They then doubled the deficit under the commissioner that was appointed to fix the prior deficit and so on etc .
When has Woodhouse ever stood up for Dunedin?

Who would listen to a homeless man...?

The new hospital won’t be built. Approvals will never be made resulting in a lifetime of delays. Get use to the disappointment Dunedin, it’s what the Council want and most of the residents too I dare say.

This is laughable. National were talking about this in 2008 and did nothing. So I'm gobsmacked that Woodhouse now talks about Labour "kick this can still further down the road".