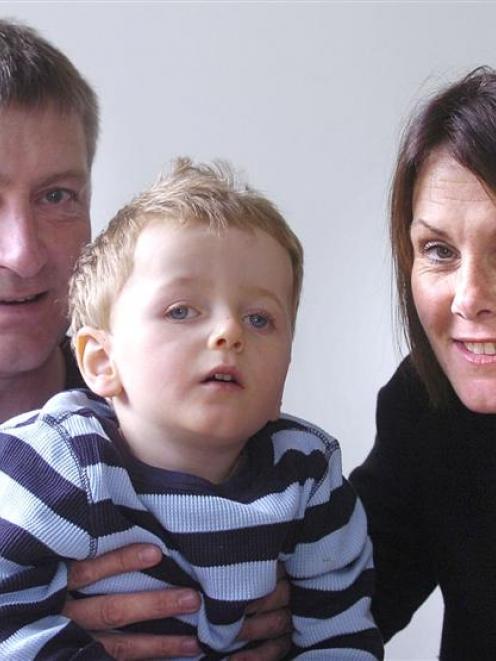 Lindsay and Shirley Turner are hopeful they will see signs of improvement in their son, Caleb, who has cerebral palsy, after taking him to the United States for experimental stem cell therapy. Photo by Peter McIntosh.
The Dunedin parents of a young boy with cerebral palsy are not taking their eyes off him, as they watch for signs of improvement in his condition after taking him overseas for experimental stem cell treatment.

Lindsay and Shirley Turner, who returned with Caleb (2) from the United States yesterday, said the surgery had gone smoothly and they now faced an anxious wait for signs of success.

Doctors told them it could be up to six months before they saw any changes in Caleb.

Caleb suffered a massive brain bleed just days after birth and has severe cerebral palsy, which is incurable. He cannot walk, talk or even roll over, and can have up to 50 seizures a day.

The Turners said the day before Caleb underwent treatment they met a little boy, and his family, who had been through the procedure about six months before.

The boy, who walked into the restaurant, had previously been blind and unable to walk or talk.

"It is stressful enough if your child having an operation, never mind being in a different country and it [the treatment] is still a bit of an unknown."

The family met the doctors in the US, but the actual procedure was performed in Mexico, as it was not legal in the US. However, the medical team had been great and very professional, they said.

Now the family, and New Zealand parents of other children with cerebral palsy, wait with bated breath in the hope the treatment shows some signs of success, and the offer of hope for others.

"Maybe next Christmas he might be able to open his own Christmas presents, rather than his big brother and sister doing it for him," Mrs Turner said.

If the treatment does help Caleb, they will return to the US for another transplant of donor umbilical cord stem cells.