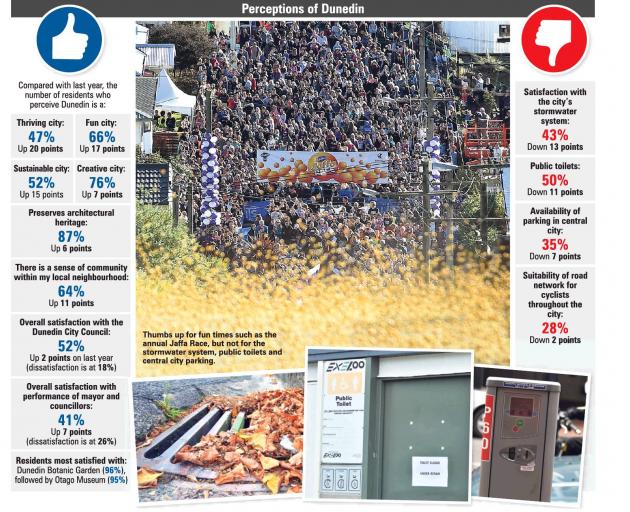 A survey showing Dunedin residents feel increasingly positive about their city shows the city is on the ''right track'', Mayor Dave Cull says.

A highlight of the council's 2016 residents' opinion survey was a significant boost in the number of people who perceive Dunedin as a thriving city (up 20 points from last year to 48%) and a fun city (up 17 points to 66%).

However, the annual survey was not all good news.

Last year's June flood was picked as a reason for increasing dissatisfaction with the city's stormwater system.

Satisfaction rates also fell when it came to public toilets, the suitability of the city's roads for cycling and the availability of parks in the central city.

Mr Cull said the results reinforced the findings of a recent national quality of life survey which showed Dunedin residents rated their overall quality of life higher than those in six other New Zealand cities.

''It is particularly pleasing to again see perceptions improving in areas which have been a focus for the council.

''For example, the rejuvenation of the warehouse precinct, celebrating, promoting and capitalising on our wonderful arts and culture scene, and promoting Dunedin as a great place to live, work, study and do business.''

The results also came as people from outside Dunedin were increasingly taking note of the positive things in the city.

He said the newly-elected council could take from the survey they had a ''very good foundation to build from''.

''This tells us we are on the right track.''

Asked about people who continued to be negative about the city, he said: ''Negativity is an attitude, it's not a fact.''

Mr Cull was also pleased with the continued strong performance of Dunedin's cultural and recreational facilities.

Results of the survey also showed almost half (48%) of residents are now satisfied or very satisfied that the DCC delivers overall value for money, up 13 points on last year.

Satisfaction with the overall performance of the DCC is also up slightly, to 52%, reaching its third-highest level since 2003.

Satisfaction with the city's stormwater system was one area which recorded a notable decrease in satisfaction, down 13 points to 43%.

''Given the flooding event of June last year, this result is not a surprise and it has become quite a focus for us,'' Dr Bidrose said.

She said some of the areas where there had been negative results this year and in
past surveys correlated to negative media coverage in the Otago Daily Times.

Of the 5400 residents randomly selected from the electoral roll and invited to complete the survey, 1577 took part.

The survey was carried out in May and June 2016 by independent research company Key Research, of Tauranga, and had a margin for error of +/-2.5%.