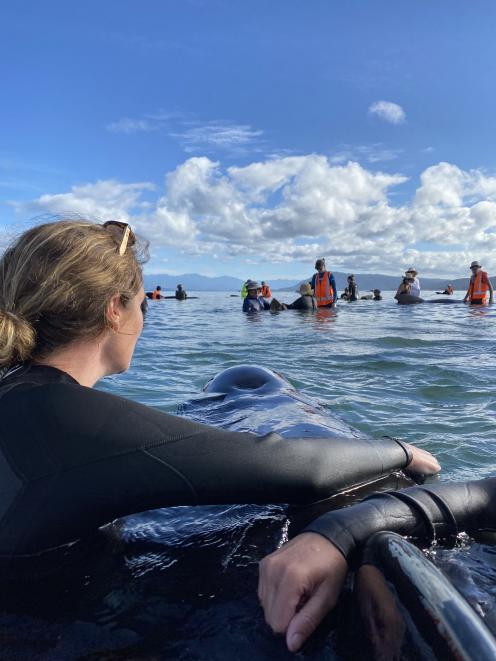 Lara Robertson, of Dunedin, sings to one of the long-finned pilot whales that became stranded on a remote beach at the top of the South Island on Monday. PHOTO: HELENA ALEXANDER
"Where the blue of the sea meets the sky, and the big yellow sun leads me home."

Those are the lyrics of The Water, by Johnny Flynn and Laura Marling — the song Dunedin woman Lara Robertson sang to help calm some of the 49 long-finned pilot whales stranded on a South Island beach this week.

The Department of Conservation was alerted to the mass stranding at the base of Farewell Spit, in Golden Bay, at 9.30am on Monday.

Ms Robertson, who is a physiotherapist and a singer-songwriter, was on holiday in Golden Bay and had been visiting a friend, who is a police officer, when they received a call about the whales.

"We thought we would go and help," she said.

They spent the next 10 hours helping keep the whales on the beach wet and Ms Robertson sang songs, including her original composition Orcas Lake, to help calm them.

"I thought that might be a bit more relaxing for them rather than listening to us talk," she said.

When the tide came in about 6pm they were able to refloat about 40 disoriented whales — nine had died — and then encourage them to swim back out to sea.

"We spent time just rocking them in the water and making sure they were all together because we wanted them to all go at the same time.

"It is amazing being with them, particularly in the water, I could feel their heartbeats.

"It was a beautiful experience."

Sadly, about 12 more whales died overnight and yesterday morning, Ms Robertson went back out to Farewell Spit to try to help the remaining 28 whales.

By 6pm yesterday, they were in the water but still close to shore.

A mass pilot whale stranding happened on Farewell Spit in February 2017, when an estimated 600-700 whales were beached. About 250 died.