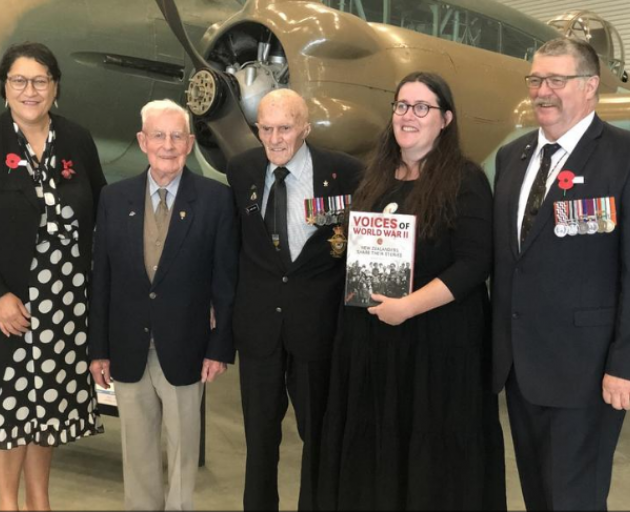 Renee Hollis holds her book on New Zealand's untold war stories with NZ Army veterans. Photo: Supplied via RNZ
Author Renée Hollis admits she was a bit overwhelmed by the response she received when she put out a call for people to send her untold stories, letters, diaries and photographs from World War 2.

The Dunedin writer received more than 100 responses from families and the end result of her mammoth project (which at one stage included over one million words), Voices of World War 2: New Zealanders Share Their Stories, has just been released in time for Christmas. 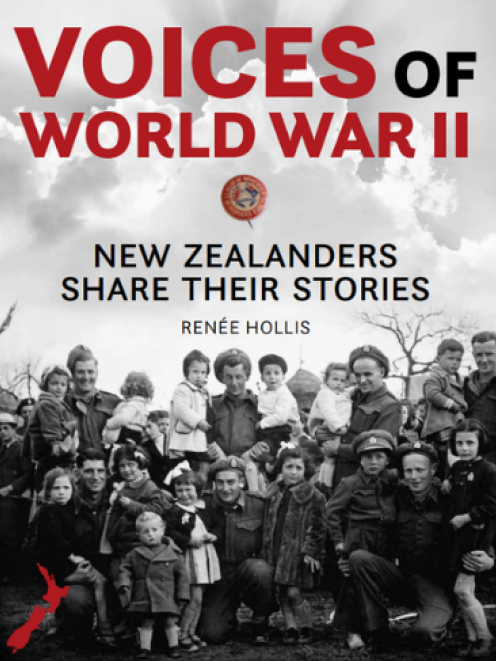 The visually stunning compendium of photos and written accounts offers a snapshot of what life was like before and during WW2, from the point of view of those who lived through it.

"I put the call out and basically asked if there were any untold stories, maybe stories that were just told in the family, and also if people had letters and diaries that they didn't know what to do with," she said.

"I had a huge response."

The 300-page hardback proved to be a big project.

"It's a huge book to have put together. It's taken me about two years."

The text includes plenty of photos and documents as well.

"I wanted the book to be very visual," Hollis said. "I didn't want it to be a daunting task for people to pick up and read."

The stories run the gamut from tales of soldiers overseas to a look at how women stepped up back home, serving as policewomen for the first time for instance.

"I found it quite interesting just looking at everyday women that were married with a few children and their husband was overseas and I just wondered, what it was like for them?"

We tend to think of misinformation and rumours as more modern problems, but there was plenty of fear and uncertainty about for kiwis at home during World War 2 as well.

"One of the interesting quotes that I found was that people (early in the war) said the war would be over by Christmas."

Stories of possible German bases hidden in the Waitākere ranges of West Auckland or worries of Japanese invasion were also rampant.

"I actually spoke to a lady who was living down in the Marlborough Sounds as a young child during World War 2 and she talked about the real fear in their families."

Families would have food and supplies hidden in nearby caves in case of a sudden invasion. 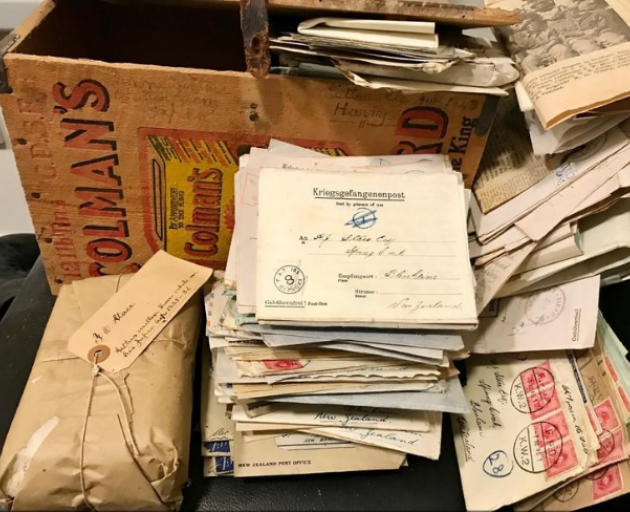 Some of the letters and packages Hollis received after she put out the call. Photo: Supplied via RNZ
Other stories included were of daring adventures overseas, such as Captain John Richardson who was captured by the Italians, or of Phyllis Latour 'Pippa' Doyle of Auckland, one of the most remarkable secret agents of World War 2.

The strong response Hollis got to her call for stories pleased her, and made her grateful so many New Zealanders still care about their history.

"I wasn't sure what kind of response I would get and I was pleasantly surprised when people were sending me material and diaries and censored letters with words cut out.

"I thought this was going to be a really interesting way for people to learn about our social history. It's all in the first person and you can almost hear each person talking as you read the quotes."

As the generation that survived World War 2 ages, Hollis said she hopes there are still more mysteries to be revealed.

"I'm sure that there's more stories as well that haven't been told."