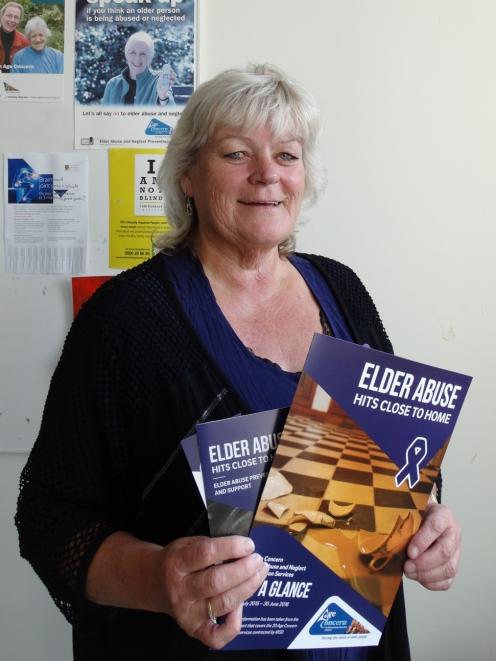 The focus of elder abuse services will shift from prevention to response, in line with government contracts which take effect from July 1.

A new type of Elder Abuse Response Service was put up for open tender, and Age Concern Otago won the bid.

‘‘While we are still awaiting word on the final shape of the service, it is clear that the focus will shift away from education and prevention to purely response,’’ Ms Bennett said.

‘‘We are unsure of how this will affect our clients, but in the meantime it is business as usual.’’

The three-year contract would require Age Concern Otago to expand its coverage to include from the Waitaki south to Balclutha and inland to Wanaka.

A part-time social worker was employed to cover the Central Otago area, and another would be needed for the Waitaki area.

‘‘With this expanded service, I’m sure we will see an increase in the number of cases we will be dealing with,’’ Ms Bennett said.

In Dunedin, Ms Bennett said she dealt with more than 100 cases of elder abuse each year — and cases were growing ever more complex.

‘‘We are finding increasingly that family members are needing support and education, as well as the older person.’’

Today is World Elder Abuse Awareness Day, and the theme ‘‘Elder Abuse Hits Close to Home’’ highlights the fact that the vast majority of elder abuse happens within families.

‘‘People find it shocking, but it is clear that elder abuse is hitting close to home,’’ Ms Bennett said.

Age Concern New Zealand statistics showed that 75% of alleged abusers were family members and 50% were adult children or grandchildren.

Abusers were equally likely to be women as men, the statistics showed.

‘‘Something I have been seeing a lot more of is grandparents bringing up grandchildren, and struggling to deal with teenage dramas,’’ Ms Bennett said.

‘‘It is hard for grandparents to say no.’’

The incidence of financial abuse was also increasing, and 51% of cases now involved money.

‘‘Sometimes, when younger family members are under financial pressure, they feel entitled to their older relative’s assets,’’ Ms Bennett said.

With the increasing cost of housing, more adult children were moving home, adding to the pressure on older people.