Electrician becomes firefighter on day off 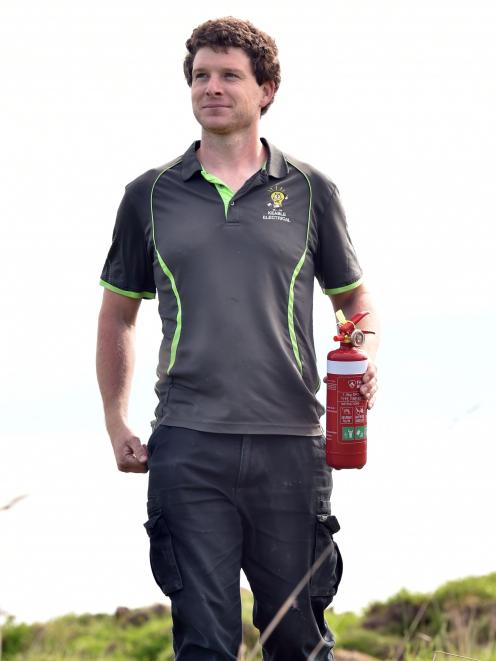 Justin Keable, and his trusty fire extinguisher, were on hand to help put out a grass fire in Kaikorai Valley on Monday. PHOTO: PETER MCINTOSH
Dunedin sparky Justin Keable just wanted to skive off work for a sunny day of fishing.

Instead, armed with a fire extinguisher, he found himself tackling a blaze on the side of the road.

The electrician had been away fishing, after taking Monday off work.

"I'd snuck off work, I'd done my paperwork for the morning so I went to the old Southern Reservoir for a fish because it was good weather."

He saw some smoke at the top of the hill, but did not think too much of it.

He was driving back to town along Townleys Rd in Kaikorai Valley about 12pm when he came across a stretch of grass and gorse on fire along the side of the road.

"I rang the fire service and jumped out with the old extinguisher, and put out the wee bit that I could to stop it spreading down the hill through the grass."

The fire was spread over about 10m, he said.

Fire crews turned up shortly after to completely extinguish the fire.

He said he always carried a fire extinguisher in the car.

"It's always handy to have."

But he was caught red-handed for taking the day off - his wife's cousin is a firefighter who turned up at the scene.

"He was wondering what I was doing having a day off," Mr Keable laughed.