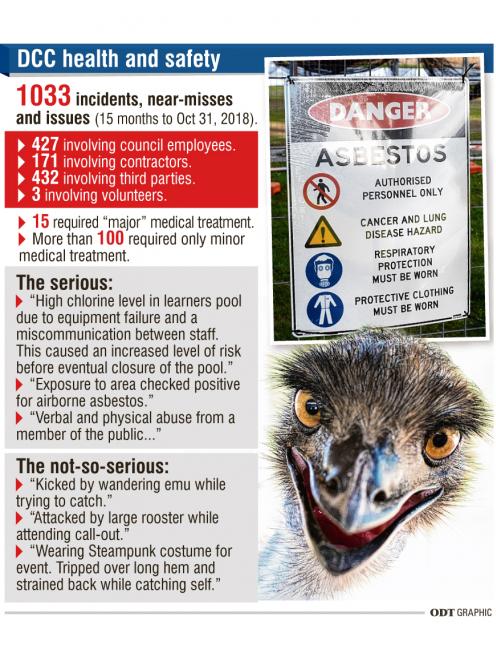 The run-in is one of more than 1000 health and safety-related incidents, near-misses and issues reported by council staff and contractors in the 15 months to October 2018.

The incident log, together with more detailed incident reports, have been released to the Otago Daily Times following an Official Information Act request.

They detailed serious and not-so-serious incidents, from a staff member exposed to asbestos fibres and a chlorine malfunction at Moana Pool, to attacks by an aggressive rooster and the emu with ruffled feathers.

There were no serious harm incidents reported during the period, but 427 others involving council employees, 171 involving contractors, 432 involving third parties and three involving volunteers.

Many involved near-misses or possible issues, but more than 100 required some form of medical treatment for mainly minor injuries received, the figures showed.

That included the staff member attacked by the emu, who was helping the flightless bird's owner to catch the bird when it "kicked out, hitting my right shin", the incident report said.

The staff member "moved away and stayed behind the bird" after that, but a subsequent investigation concluded a new approach was needed for "dealing with a large bird on the loose".

"After discussing the incident, we have agreed that possibly the best course of action in the future is to cover the animal's head to reduce the animal's stress levels and in doing so reduce the risk of injury."

The emu was not the only animal to lash out - the log included dog bites and aggressive seagulls, but also the "unprovoked attack by a rooster" as a staff member crossed a paddock.

The staff member needed antibiotics after receiving cuts to their leg, but the incident report later noted: "Animals are very unpredictable and all due care was taken at the time."

"The incident has been discussed ... and a new procedure developed for dealing with chickens or roosters in the future."

Animals were not the only unusual hazard either - one staff member strained their back after tripping over the long hem of the steampunk outfit they were wearing for an event.

But, more significantly, the log also disclosed an equipment malfunction which resulted in the Moana Pool learners pool being "evacuated" after too much chlorine was added.

A DCC staff member had also been offered a chest X-ray and other tests, after being exposed to asbestos fibres inside a roof cavity, and several others had been accosted - physically, verbally or both - by irate members of the public.

She was pleased the number of near-misses being reported was increasing, which showed a maturing approach to health and safety across the council.

That reflected the council's investment in training, monitoring and improved systems, which encouraged staff to report possible issues early, she said.

"It doesn't matter how trivial, because sometimes it's those little trivial things that can lead us to having a bigger issue resolved, which is what we're after."

While training cost money, the cost of not acting - measured in injuries and lost time - could also be "huge", she said.

"I think the staff have come absolute light years with how comfortable they are with it being part of everyday work life now, which I think is really important."

When incidents occurred, managers were alerted and an investigation followed, and most resulted in changes.

"That is not about a blame culture ... what we're trying to do is change behaviour, not punish people."