Entrepreneur reveals how he made peanut butter dream reality 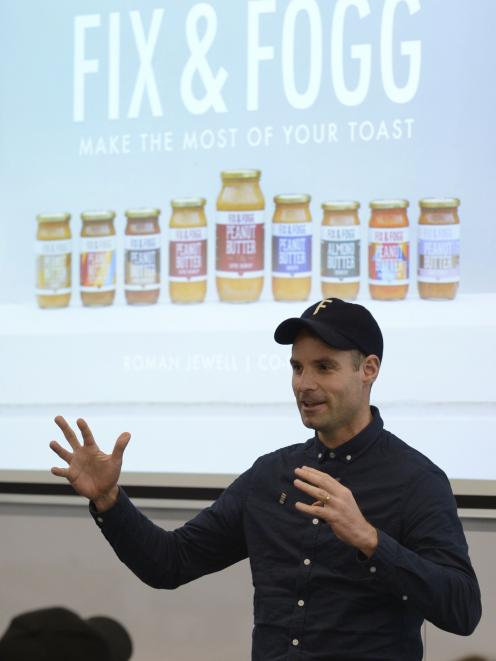 Fix and Fogg founder Roman Jewell describes his love of making peanut butter, at the University of Otago yesterday. Photo: Gerard O'Brien
A key break for premium peanut butter maker Fix and Fogg came when a supermarket buyer spotted a jar of the firm's peanut butter on sale in a furniture shop.

Mr Jewell, who is a University of Otago management and law graduate, outlined how he and his wife, Andrea, both former lawyers, had founded their small company, producing premium peanut butter in Wellington.

The company was now selling a jar of peanut butter on average every minute, and were selling extensively abroad, he said.

New Zealand remained the company's biggest market, but the United States market was ''also a huge opportunity for us'', he said.

More than 70 people yesterday attended Mr Jewell's talk at the university School of Business, which was hosted by the Otago management department and its master of entrepreneurship programme.

The talk was billed as Mr Jewell sharing the journey of the company's first five years, and what he had learned along the way - ''the tips, secrets and hard-fought life lessons''.

His involvement with his wife in the business was strongly values-based, and he enjoyed the freedom of deciding what he did and who he worked with.

He had been required to move beyond his comfort zone, had always had to work hard, and had helped dream up lateral-thinking marketing ideas, having no dedicated marketing department.

''There's no road map for how to make a peanut butter factory.''

He also enjoyed the firm's ''horizontal'' approach, in which all aspects of the company operation, including all the company's peanut butter was made in-house, through a hands-on process.

The relatively small size of the New Zealand market was a limitation, but he enjoyed New Zealand's entrepreneurial spirit and strongly collaborative approach taken by other small businesses.

''I really like the idea of staying premium,'' he said.

Given the costs of relatively small scale manufacture and of selling abroad, it was important to continue to adopt a value-added approach.

By contrast, some of New Zealand's dairy export approach had reflected a high volume, wholesale-type approach, which ''makes me a bit sad'', he said.