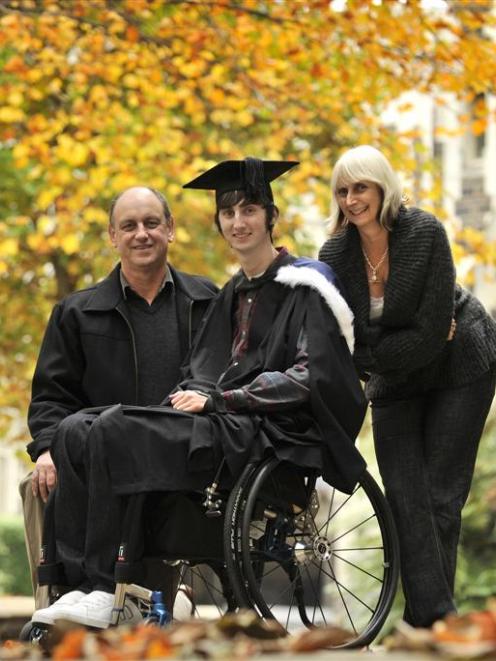 University of Otago psychology graduand Tim Young, flanked by parents Phil and Viv Young, prepares for his graduation from the university today. Photo by Gerard O'Brien.
When snowboarder Tim Young unexpectedly flipped upside down during a jump and could see nothing but sky, instead of the ground rising to meet him, he knew things were going to end badly.

That day, Mr Young (22) had been snowboarding at Whistler ski resort, at the end of a working holiday in Canada.

He had completed a BSc in psychology at the University of Otago in 2008 and had planned to graduate in May last year.

When he landed heavily, breaking his neck and becoming a tetraplegic on February 10 last year, his world and graduation plans were thrown into chaos.

He spent the next 10 months in various hospitals, initially at Vancouver Hospital, then at Middlemore, in Auckland, and at the Burwood Spinal Unit in Christchurch. About half that time he was on a ventilator.

This year Mr Young, who lives in Hamilton, is out of hospital, and enthusiastically playing wheelchair rugby.

He yesterday took a direct commercial flight from Auckland to Dunedin.

With about 500 other graduands, he will graduate from the university in a ceremony at the Dunedin Town Hall today.

"I just can't wait to see all my friends I haven't been able to see for a long time," he said.

In the accident, he fractured the C5-C6 vertebrae in his neck and lost feeling in 84% of his body.

His travel insurance proved crucial, covering about $800,000 in medical costs and the cost of a chartered jet aircraft, with two pilots and two medical staff aboard, which flew him back to New Zealand.

He has now started some Massey University extramural study. He hopes to gain an MSc and become a child psychologist.

He has been strongly supported by his family and friends. His unfailingly positive attitude and sense of humour have also greatly helped.