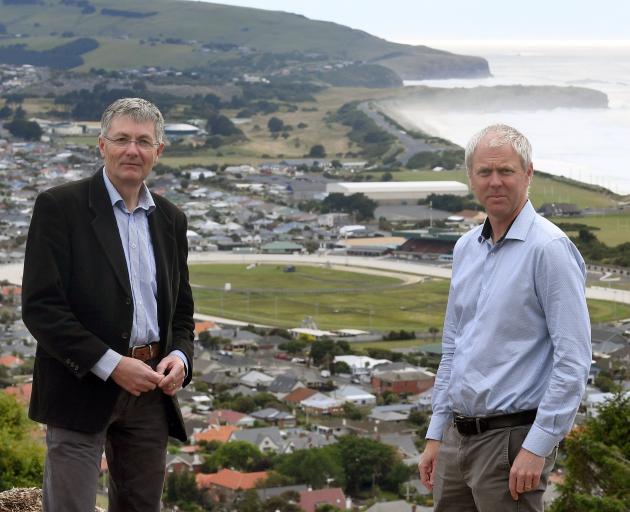 Otago Regional Council operations general manager Gavin Palmer (left) and Dunedin City Council infrastructure services general manager Simon Drew are considering what needs to happen to shore up South Dunedin’s future. PHOTO: STEPHEN JAQUIERY
Five years on from a big storm that flooded South Dunedin, some fixes have been made, but a grand plan mapping out the area’s future has yet to take shape. Grant Miller looks at the challenges and what needs to happen next.

Rain on the roof is a soothing sound for many people on their way to a good night’s sleep, but not so much in South Dunedin, where it induces anxiety.

"As soon as I hear rain I think, ‘the garden needs it, but I hope it doesn’t last too long’," South Dunedin resident Eleanor Doig says.

On June 3, 2015, stormwater and wastewater systems could not cope with a deluge and surface flooding was extensive in South Dunedin. Ms Doig could not get out to her washing line. Others had it much worse. Carpets had to be ripped up and soggy possessions thrown out.

About 2000 homes and businesses were affected.

Dunedin mayor at the time Dave Cull tried to place the disaster in its wider context, suggesting realities needed to be faced. Low-lying South Dunedin was on a reclaimed wetland and simply renewing pipes would not be an adequate fix for the challenges ahead, he said at the time. 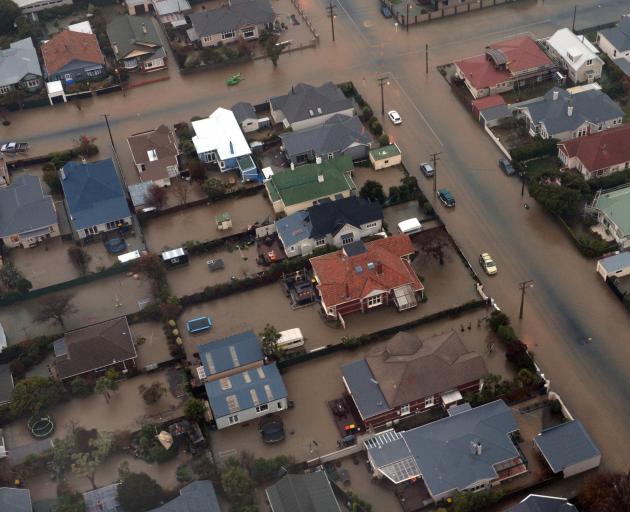 If impacts from climate change pan out as expected, storms will become more frequent, sea level rise will accelerate and the water table at South Dunedin will be forced up. The ground will be less able to soak up rainfall and that puts more pressure on the stormwater system.

Anxiety levels have shot up lately. This week the Government declared climate change an emergency, and a report cast significant doubt on the viability of insuring coastal properties for flooding. Owners of seaside properties could face mounting premiums or reduced cover within 15 years.

Multimillion-dollar interventions have been suggested for Dunedin, but five years on from the South Dunedin flooding, which exposed the city’s lack of readiness, a comprehensive plan has yet to take shape.

Ms Doig, the South Dunedin Community Network chairwoman, says a broad plan is needed. Housing stock in the suburb is some of the oldest in New Zealand, for example. The need to create quality social housing should be thought about now, she says.

Some important work has been done and more is on the way.

He describes investment in the Portobello stormwater pumping station as a quick win.

Other changes included improved inspection, cleaning and maintenance of the 1500 mud tanks (stormwater grates in the gutter) in South Dunedin; fitting backflow prevention valves to help stop wastewater getting inside homes; replacing old wastewater pipes in the Kaikorai Valley area; and bringing in higher minimum floor levels for new homes in low-lying parts of the city.

Now for the hard part. 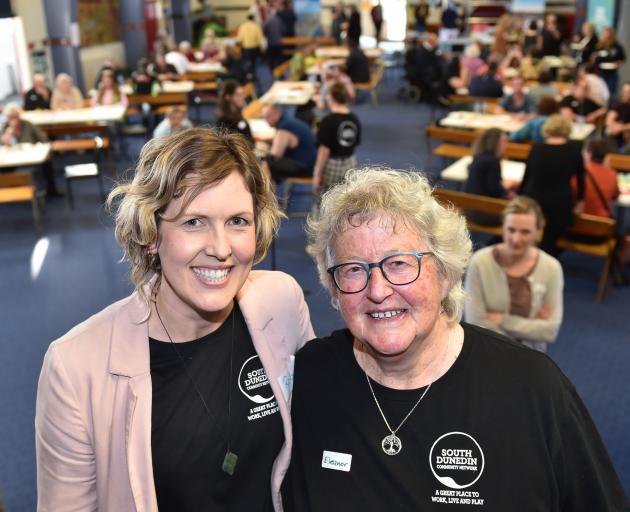 The South Dunedin Community Network has a key role in helping the suburb prepare for its future. Network manager Robyn McLean (left) is with chairwoman Eleanor Doig at a recent hui. PHOTO: GREGOR RICHARDSON

Planned major projects include laying a new pipe so wastewater from the Kaikorai Valley area can be piped to Green Island for treatment ($7million); upgrading the Green Island wastewater treatment plant ($44million); and flood reduction in South Dunedin over the next 10 years ($35million).

But development of a holistic, comprehensive plan for the future of South Dunedin is in the early stages. It’s called the South Dunedin Future programme and the city council and Otago Regional Council are embarking on an extraordinary consultation effort, attempting to meet more than 150 community, sports, religious and social groups.

Informing this is a lot of technical information that comes from the regional council, led by operations general manager Gavin Palmer, who wrote a comprehensive report about natural hazards in 2016 and an updated version recently.

GNS Science Dunedin principal scientist and structural engineer Simon Cox likens the situation to being armed with a sword and confronting an intruder in the dark. A much better assessment about risk can be made once the light has been turned on. And that’s what vastly improved monitoring has achieved.

Dunedin Mayor Aaron Hawkins says work on finding solutions has not slowed since 2016, even if it has not all been in the spotlight.

"The challenges are large and complex, but we believe there is time to respond and reduce the flooding risks in a careful and considered way," he says.

There are no plans to abandon South Dunedin, but parts will almost certainly have to change.

Mr Hawkins says the needs of people must not be overlooked and that’s where the South Dunedin Community Network is to the fore.

"We know that stronger communities are better equipped to handle these challenges."

Mr Hawkins says climate change also presents opportunities to create a shared long-term vision and urban regeneration. A library to be developed in the area is considered a critical part of that.

The nature of the challenge

About 2700 homes are on land at least 50cm below the mean high-tide mark.

Infrastructure located on or close to the South Dunedin plain includes State Highway 1 and the main trunk railway line. Facilities include the Edgar Centre, Tahuna wastewater treatment plant, an electricity substation and an extensive commercial district.

The suburb is flat and has no natural channel for draining water. Water also needs to drain off the nearby hills.

South Dunedin’s stormwater pipes were mostly installed in the 1960s. The stormwater system is having to do more work now, however, because less ground is available where rain can soak in.

The South Dunedin stormwater network consists of about 65km of pipes and box culverts. They vary in width.

Meantime, mean sea level at the port of Dunedin is inferred to have risen at an average rate of 1.3mm a year since 1900. Sea level monitoring at Green Island since 2002 suggests the rise has accelerated.

However, the more the water cycle is understood, the better decision-makers may be able to tailor solutions.

Dr Palmer says the regional council monitors the level, temperature and, at some points, salinity of groundwater at 23 locations in South Dunedin and Harbourside, up from four bores in 2016.

Extensive analysis has been done on how water behaves beneath the city.

Work undertaken by GNS Science (and supported by the regional council and University of Otago scientists) indicates South Dunedin soils are not as porous as they were previously assumed to be, he says.

Dr Cox says there is less water in the subsurface and it is slower-moving than expected.

This could make it easier to develop engineering solutions.

What is so hard about this?

Dealing with uncertainty is a significant consideration. There is uncertainty about how exactly the dynamic natural environment interacts with the built environment. The extent to which the climate will change is another uncertainty.

Decisions have to be made about levels of risk that are acceptable, the most realistic ways of adapting, how much money should be dedicated to the cause and where liability should fall.

Mr Drew was part of a panel at the ReBuilding Nations Symposium 2020 last month and he says the situation is complex. He argued at the conference that central government needed to take a greater lead.

When it comes to adapting to climate change, roles and responsibilities are unclear, he says.

Mr Cull, too, made similar arguments before his term finished as Local Government New Zealand president this year.

South Dunedin was used as a case study for an LGNZ report and Mr Cull said lack of a national adaptation policy needed to be sorted out urgently.

"Our case studies show that without clear direction from central government, and the policy tools and funding to match, councils and communities will be mired in litigation, uncertainty and greatly increased costs."

Consultation on the South Dunedin Future programme continues and options are expected to emerge next year.

Another potentially significant development occurred this week. The regional council wants a joint governance arrangement with the city council on adapting to natural hazards and a joint work programme. City councillors have not yet determined whether they agree.

Nationally, reform of resource management legislation is on the Government’s agenda and this could include a separate focus on dealing with complexities linked to climate change. But the Government has yet to agree on a position.

In the meantime, South Dunedin residents and the people who use the area’s facilities will have plenty of opportunity to have their say.

The issues are complex, much is at stake and decision-makers want to receive a lot of input before they work out what must be done.

Dredging the upper harbour will cause subsidence in surrounding areas.
Dredging should be stopped.