Family of 13 relieved to receive help 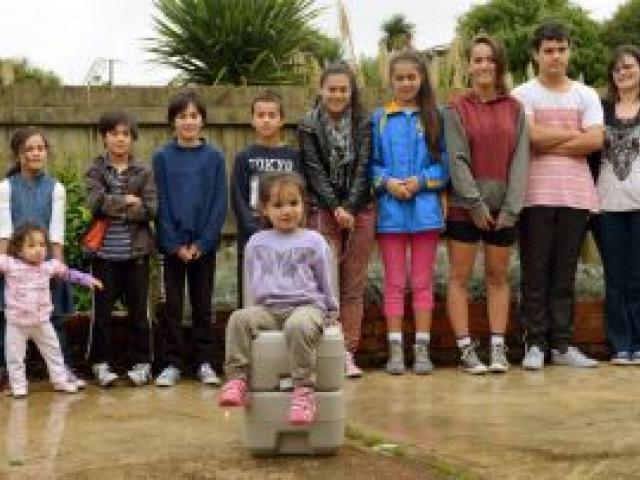 Nika and Shannah Taburuea (right) with 11 of their 12 children, (from right) Losena (14), Kita (16), Viena (13), Feangainga (15), Vini (11), Judah (10), Seth (9), Deborah (7) with Taliah-Rose (1), Benji (5) and Lielani (4) at the front on one of two new chemical toilets the Dunedin City Council has supplied to the family after flooding on their property led to problems with their toilet. Photo by Stephen Jaquiery.
A Dunedin family of 13 is elated the city council has stepped in to help after what they say has been years of inaction over sewage-contaminated water seeping into their property after heavy rain.

Nika and Shannah Taburuea's home sits on a low point of School St, beside the Kaikorai Stream, not far from where one of the city's few remaining sewer overflows empties into the stream in wet weather.

Mrs Taburuea said that after heavy downpours, the stream flooded their section - about twice a year - with water flowing up to doors and under the house.

The family's toilet, fitted with a no-return valve, also stopped working during flooding, she said.

This was a major problem with 11 children aged between 1 and 16 still at home. Their eldest daughter lives in Auckland.

The house was becoming so damp some of the children had developed health problems, she said.

Several times Mrs Taburuea had seen sewage floating out of the stream and into their property.

She had called the council many times about it in the six years they had lived there, but until last week there had been no action, she said.

''We've been told we shouldn't be staying here, but with so many of us, it's hard to find somewhere to go.''

The last straw was at Easter, when water came into a sleepout behind the house, where some of the family slept, after Good Friday's downpour.

Failing to get any response to three calls made to the council, Mrs Taburuea emailed chief executive Sue Bidrose in frustration.

To her surprise, Dr Bidrose and water and waste group manager Laura McElhone turned up on her doorstep a few days later.

Dr McElhone said she and Dr Bidrose explained to the family the many factors contributing to the problem.

Compounding the fact the sewer overflow was nearby was that the sewer main in the area was prone to overload because stormwater was entering from historic and illegal connections, and groundwater was leaking through cracks in the aged pipes.

The property was also on the end of a common drainage scheme, so while water from neighbouring properties flowed towards the stream, it could pool at their house if the stream was at capacity.

The council recognised sewer overflows were unacceptable and aimed to remove them all, Dr McElhone said.

The waste and stormwater pipelines in the Kaikorai area were scheduled to be replaced during the next 15-20 years, which would remove the need for the overflow.

Some sections had been prioritised and would be done within two to three years, which should stop most of the overflow happening.

In the meantime, the council had given the family two $150 chemical toilets to use when the house toilet stopped.

It would also investigate options such an installing a tank on site where sewage from the house could be stored when the toilet stopped, and pumped away once the sewer had capacity again.

Dr McElhone said the council would pay for such a measure because the Taburueas were paying drainage rates and should therefore expect to have their waste water drain away.

Other options such as raising the house were discussed, which the family would have to pay for, although they could possibly repay it through a targeted rate scheme, subject to approval by the council.

The council would also look at the stream's capacity, pinch points and planting, to see if anything could be done to relieve flooding.

All were only options to be considered, and the family would be kept informed.

Dr Bidrose said she had visited the family because they were ratepayers in a particularly unusual and difficult situation, given the house's location and the size of the family.

Ratepayers paid council staff to provide a service, and when things went wrong, special attention should be paid by staff, she said.

Mrs Taburuea was impressed with the response.