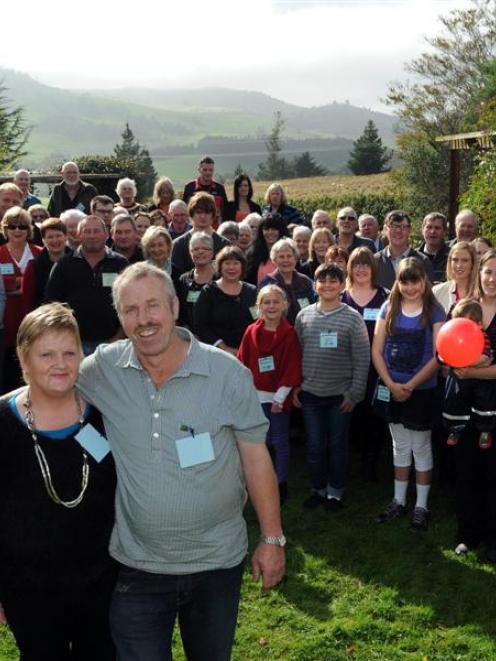 While most people enjoyed a nice long sleep-in over Easter, Philip and Sue Lee were still up at daybreak, working their Flag Swamp farm like their parents and grandparents before them.

And on Saturday, they were also preparing for the Lee family's 100th anniversary celebrations on the farm.

About 90 family members from as far away as Auckland and Australia attended.

The farm was established by Thomas and Mary Lee, who arrived in New Zealand in 1880.

They had established farms at Highcliff (Paradise Farm) and Allanton (Bruntsfield Farm), before moving with their son William to establish the farm at Flag Swamp.

Since then, the farm has been taken over by William and his wife Ellen; their sons Steven and Hazel, and Allendale and Ruth; and now Allendale's son Philip and his wife Sue own the farm.

Mr Lee (57) conceded working the 149ha property was nowhere near as much work as it would have been in his grandfather's day.

''There's not as much elbow grease required.

''Modern machinery, like tractors, mowers and hay balers, mean you don't have to do things like make hay by hand.''

When asked what it was that inspired him to get up so early every day, Mr Lee said it was in the blood, and if you didn't do it, the farm would fall into another's hands.

''You don't want to ruin the family history. I would hate to see the farm go out of the family.

''There's no place like here. There's a lot of family history in the community.''

And it seems the property will remain in the family for yet another generation, with Mr Lee's two sons also keen to continue working the farm.

The family celebrated the farm centenary on Saturday, with a tree planting and a dinner at the Waikouaiti Events Centre.