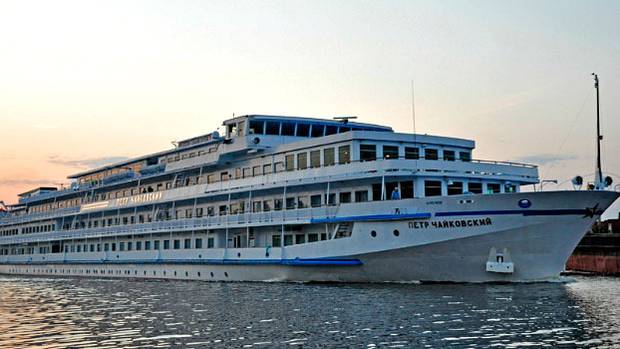 The river cruise ship Pyotr Tchaikovsky
A Dunedin man has described a "harrowing" early morning evacuation from a Russian cruise ship after a fire started spreading from a nearby vessel.

Belleknowes couple John and Chris Burton were on the ship in St Petersburg yesterday as part of an 11-day cruise to Moscow.

Local media reported that one person was killed in the fire, which began on the river cruise ship Pyotr Tchaikovsky moored alongside the Kiwi's cruise ship

At 5.15am they were woken by a loud Russian voice on the intercom.

"Obviously, we couldn't understand a word of what was being said."

There was a knock on their door and a crew member motioned for them to grab life jackets and get on shore.

"We joined a large gathering and noted the arrival of several fire trucks followed by ambulances.

"We had literally nothing but our sleepwear."

More emergency services vehicles arrived until there were about 12 fire trucks and six ambulances.

A man in poor condition, naked from the waist up, was carried past on a stretcher.

They were then told the fire was in the kitchen of the MV Tchaikovsky, which was moored alongside and tied to their ship.

The smoke "billowed out" from the rear of the vessel, he said.

"A member of the crew came to us with slippers and a blanket and we were relieved to feel warm again."

After an hour standing on shore they were allowed back on the ship and told that the day would proceed as scheduled.

"It's been a harrowing experience."