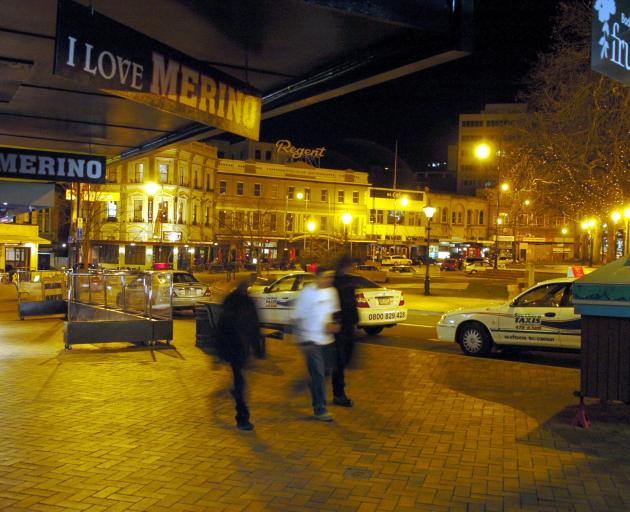 A Dunedin man who witnessed what he says are "absolutely outrageous'' scenes of disorder and violence at the Octagon taxi rank wants something done about the matter.

He has called for a barrier system at the rank, and security guards in place before somebody gets seriously hurt.

Steve Parkinson said he had seen fighting at the rank three times, the most recent last Saturday morning.

A taxi had stopped at the back of a long taxi queue about 2.30am, rather than the front.

A group from the back of the queue decided to take that taxi, but another at the front said the taxi should have been theirs.

One man from the latter group was punched to the ground, and another dragged away by the neck, before being helped by others.

"It's getting totally out of hand, and someone's going to be seriously hurt. If there was some sort of control there, this sort of thing wouldn't happen.''

The victims had left in a taxi, and police had not been involved.

Mr Parkinson suggested a barrier type system and two "controllers'' to manage the flow into the taxis.

Another option would be buses until 2am as a way to ease congestion.

Police yesterday afternoon were unable to respond to questions about disorder and violence problems at the taxi rank.

Octagon bar the Terrace owner John McDonald said he had heard from customers the taxi rank was "prone to problems - most certainly it is''.

Mr McDonald said the major problem was the length of time it took to get a taxi.

He said the issue had been flagged by the Dunedin City Council and police as an issue for the All Blacks v Wales test next month.

In his opinion, the problem was not enough taxis, meaning huge delays.

Dunedin City Council customer services agency manager Adrian Blair said the council would "certainly be interested in working with other stakeholders to try to do something'' about the problem.

However, the council would not be contributing to the provision of security.

The council did have city safety officers in summer, and the Octagon was a big focus for them.

He had seen people cutting into the queue, and in that situation they were asked to go to the back.

"The basic thing is patience. Sometimes there are too many people and not enough cars.''

Mr Ross said he had not seen any violence.