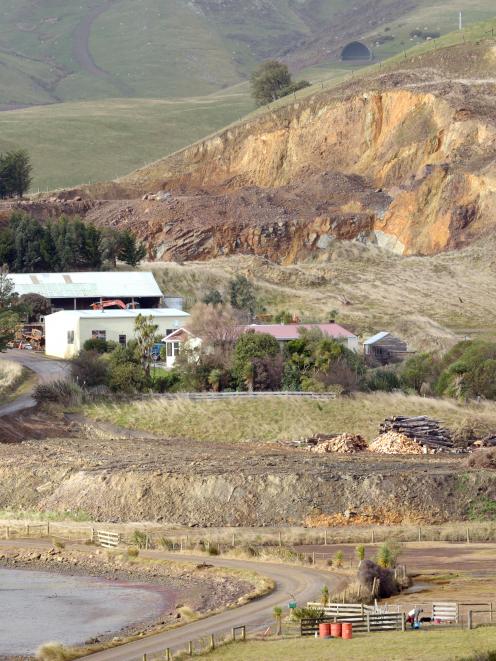 The quarry was found to be operating beyond its boundary early last year, by extracting rock from further up Geary's Hill - overlooking the inlet - than was permitted.

Since then, council staff had concluded the quarry was in breach of at least 10 consent conditions, while compliance with another five was questionable.

The company had been forced to seeking a variation on its existing consent, to legalise what it had done, but was also seeking to expand its footprint for future operations.

The application has prompted 40 public submissions, including 32 from neighbours and others opposed to the move, which will be heard by the council's hearings committee beginning today.

A report by council planner Darryl Sycamore recommended consent be granted, but with a list of tight new conditions preventing further expansion of the quarry's operation.

Alternatively, independent commissioner Andrew Henderson could call in the consent and consider enforcement action, ''given the extent of the breaches''.

The recommendation came after council landscape architect Barry Knox said Mr Clearwater had shown ''contempt'' for existing consent conditions, and was unlikely to comply with new ones.

However, Mr Clearwater hit back yesterday, telling the Otago Daily Times the report contained mistakes. Critics of the operation were rallying against the company, but were ''just scaremongering'', he insisted.

''We haven't actually done anything wrong.''

Among the submitters, Fiona and David Harrison, who run a boutique lodge in the area, warned the company appeared set on removing the top of Geary's Hill. It was a concern shared by Save the Otago Peninsula, while Te Runanga o Otakou worried continued quarrying could undermine the hill's integrity.

That was despite the quarry lying inside the peninsula's coastal outstanding natural landscape.

Mr Sycamore's report said Mr Clearwater had also indicated a desire for a ''considerable extension'' of the quarry in future.

Mr Clearwater said that was not sought yet, but he would not rule out the move in future.

''I'll never rule anything out ... There is a large resource of rock there, so why would you not consider it?''The quarry, at 194 Papanui Inlet Rd, had been operating a smaller farm quarry before a consent allowed it to expand in 2007.

Conditions attached to the consent set limits for the quarry, including the 45m contour on Geary's Hill, and required a modified wetland within the property to be reinstated.

All three conditions had been breached, along with others, and the quarry appeared to be run in ''an ad-hoc manner'', Mr Sycamore said.

A series of annual monitoring reports required by the council had also not been received until this year, prompting some submitters to claim they had been ''recently manufactured'', he said.

Mr Clearwater denied the claims, saying extraction above the 45m contour on Geary's Hill highlighted the council's failure to monitor the quarry.

The company had supplied GPS co-ordinates detailing the extent of the quarry, and had been ''working to those points ever since''.

The information had turned out to be inaccurate, but ''indirectly, it's all bad monitoring from council'', he said.

He also rejected a suggestion dumping on site was supposed to be restricted, saying a 1m-high limit on any increase in the ground level applied only at the boundary.

Dumping had already gone beyond that, lifting the ground level by 4m on average, and the company planned to increase that to 10m before reinstating the area, he said.

Mr Clearwater also denied manufacturing annual reports, saying: ''We've been doing them. Council have been quite regularly losing them.

''I think there's a fair bit of arse-covering on their side of things going on,'' he said.

The hearing is expected to conclude tomorrow.