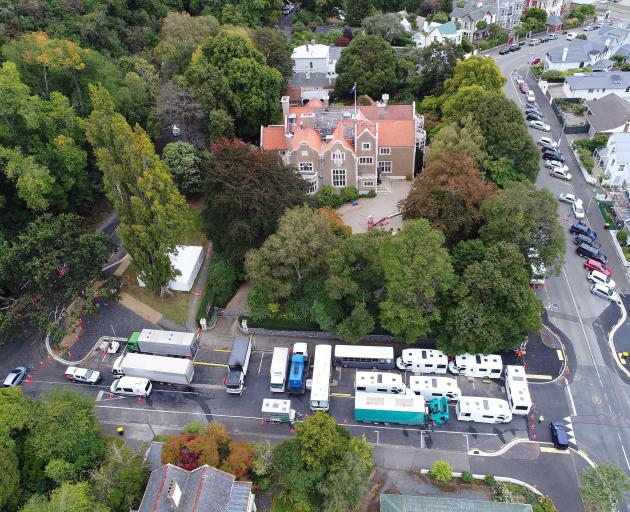 Filming of The Royal Treatment has been carried out at Olveston Historic Home in Dunedin this week. PHOTO: STEPHEN JAQUIERY
Filming a Netflix movie in Dunedin will cause some disruption for residents and businesses from Friday, but city councillors are extolling the payoff.

Fairy tale romance The Royal Treatment had created work for 30 actors, 100 extras and an extensive film crew, Dunedin city councillors were told at a meeting yesterday.

They also expected the presentation of city landmarks and heritage on screen would bring further benefits.

Councillors decided temporary road closures in parts of Vogel St from tomorrow to next Wednesday should go ahead to allow further filming to take place.

The road to bliss has been rocky lately, however.

Vogel St closures were advertised in the Otago Daily Times on Wednesday last week and readvertised on Tuesday, but as a proposal on the second time and with different, later, closures

An extraordinary meeting had to be called by the city council at late notice to ensure the temporary road closures could be approved.

A council spokesman said adjustments in the film’s production schedule were made after changes in Covid-19 restrictions and information in the first advertisement was accurate at the time.

No formal objections were received about the planned closures, but some people in the hospitality and retail sectors had expressed concerns about parking and accessibility for customers and service vehicles.

The film production company had made every effort to minimise effects on businesses in the Vogel St area, the spokesman said.

Explanations for mixed messages in Oamaru, another location for filming, were slightly different.

The film company, B&G Productions NZ, has applied to close streets to traffic in Oamaru’s Victorian precinct at various times on March 26, 27 and 28.

Several Harbour and Tyne Sts business owners expressed concerns about lack of consultation, as a notice in the Oamaru Mail was the first confirmation they had received of filming dates.

‘‘It is unfortunate that the advance public notice published ... was the format of a second notice, and not the first notice advertising the proposal and consultation details,’’ council roading manager Mike Harrison said.

B&G Productions NZ had started consulting affected businesses, but had not contacted everyone before the notice was printed, he said.

The Waitaki council apologised for any confusion or inconvenience.

Just four people had to be brought into New Zealand from overseas.