A building in South Dunedin has been "significantly damaged" by a blaze which, at its height, required six fire appliances and an aerial unit to get it under control.

A Fire and Emergency New Zealand spokeswoman said they were called to the blaze, in King Edward St, about 8.50pm last night.

Several members of the public had made calls after seeing smoke rising from the building.

Flames on the top of the building and a pillar of smoke could be seen from the surrounding hill suburbs.

Dozens of people were out on the street watching flames and large amounts of smoke above the two storey structure, the former Wolfenden and Russell building, situated between King Edward St and Rankelior St.

The building was significantly damaged in the blaze. Photo: James Hall

At the height of the blaze, there were six fire appliances, one aerial unit and a command unit at the scene, the spokeswoman said.

When crews arrived the fire appeared to be at the rear of the building and was working its way forward, she said.

Fenz area commander Phil Marsh said someone lived on the top floor and they had initially had concerns, but that person had since been accounted for.

The lower floor of the building was commercial, but was unoccupied.

"It's taken most of our firefighting resources trying to put it out", Mr Marsh said about 11pm last night.

"We've just really managed to start knocking it back now". 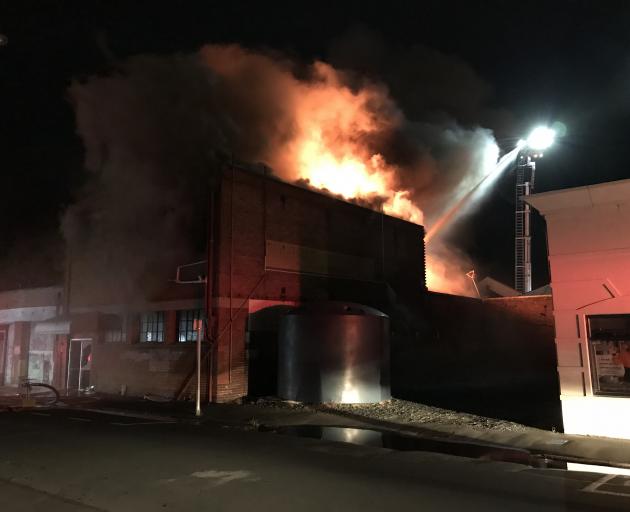 Mr Marsh praised the efforts of firefighters in stopping the blaze from spreading to neighbouring buildings.

There were concerns earlier the roof of the building may collapse, threatening firefighters and surrounding buildings, though that threat appeared to have been contained.

The force of the water hoses sent sheet metal from the roof flying to the ground below, adding to the dangerous conditions.

A Fenz spokeswoman last night said crews had also attempted to battle the blaze from inside the building. 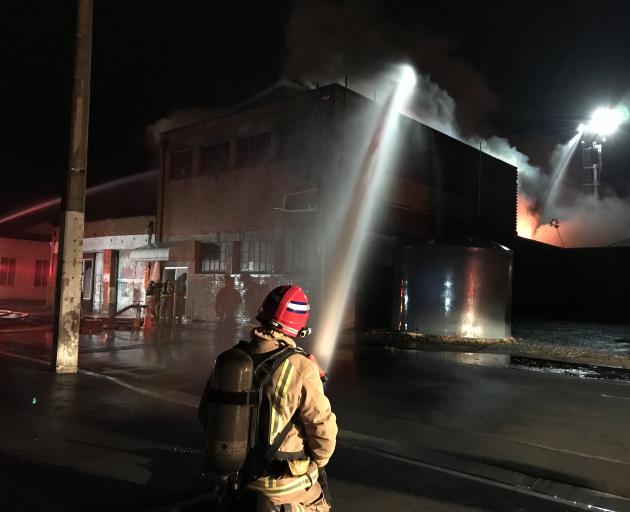 Firefighters battle a large fire on Rankeilor St in South Dunedin. Photo: Gregor Richardson
This morning just after 8am, the blaze appeared to be out, cordons were still in place on King Edward St and Rankeilor St and firefighters were at the scene.

A Fenz spokeswoman said the fire had been extinguished but a crew remained at the scene to dampen down any hot spots.

The fire had caused "significant damage" to the building and it was believed there had been some kind of structural collapse inside, she said.

The cause of the blaze was not yet known and a fire investigator has been called in, she said.