A firefighters' union has criticised ongoing staff shortages, saying Fire and Emergency New Zealand is playing "Russian roulette" with the lives of the public. 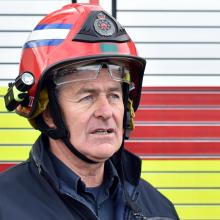 If there was an emergency in the city, it would take longer for a crew to arrive from an outlying station to attend the incident.

Many firefighters were doing "extraordinary hours" to cover the gaps, not just in Dunedin, but across the country, he said.

The expected ratio of four firefighters to a truck needed to be increased to at least five to cover for leave, training and injury.

Staffing problems had been flagged in the past, but now the public was suffering as well as firefighters.

If not tackled now the problem would get worse over the next decade.

She called it a "crisis" situation but did not believe it was a funding issue. .

The issue was with Fenz’s priorities, where large sums of money were being spent to create a corporate structure despite problems with uniforms and appliances.

"It’s just a refusal to plan," she said.

The buck should stop with the executive leadership team and board.

There needed to be an inquiry, she said.

Fenz chief executive Kerry Gregory said it had the capacity and planning in place to respond to emergencies, and contingency plans were always in place.

Before overtime, firefighters worked an average of 42 hours a week and were rostered so they could respond to incidents around the clock.

“I am aware that some personnel occasionally work long hours and like many organisations, we have recently been impacted by absences due to Omicron but I am not aware of any of our people routinely doing 90 or 100 hours a week," Gregory said.

Having been a volunteer firefighter and knowing what the (paid) management are like, glossing over any dissent and ignoring any complaint from the ranks, I'd be inclined to believe the union and say that the residents of Dunedin should be worried.
In my time I noticed that on the (very) rare occasion that we saw management, they were pretty well removed from the reality of what happens on the front line.