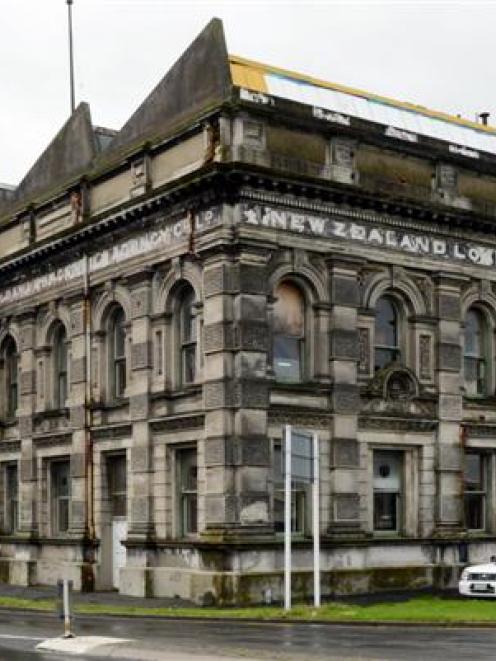 The exterior of the New Zealand Loan and Mercantile Agency Co Ltd building in Thomas Burns St, Dunedin.
The first steps have been taken in the proposed redevelopment of a historic Dunedin building.

Owner Russell Lund said it was another step forward for the redevelopment, but was ''just a matter of course''.

''We don't have to do a great deal to the building so that [building consent] was pretty easy.''

The building consent allowed an estimated $50,000 of earthquake strengthening - including securing masonry walls to the roof diaphragms and a concrete floor being laid on the second floor - to go ahead.

Dunedin City Council resource consents manager Alan Worthington said the consent was publicly notified as the proposed residential use of the building was a non-complying activity because of its Port 2 zoning.

A date for a resource consent hearing was not set yet, but it was likely to be in August, he said.

''There's a bit of innovation there ... and sometimes we need that to make something vibrant,'' he said.

''As long as it's sympathetic to the building, we are all for it.''

''The building itself is such a landmark from so many perspectives and ... it's great to see it coming back into use,'' she said.

''It's adaptive reuse in the best way.''

The trust would be submitting on the application and it would likely be supportive, she said.

The exterior of the category 2 142-year-old building will be restored and the second floor redeveloped into a 24-unit apartment complex if the proposed resource consent application is approved.

''Everyone I have spoken to has been universally positive about the project,'' he said.

He was excited about the potential of the building.

''But we really have to get through the consent and see what conditions are imposed.''