By John Lewis
0 Comments
The last visible signs of a major Dunedin landmark will be out of sight by the end of this week.

Removal of the two silos which have towered over the former Cadbury’s chocolate factory for the past 30 years, has started.

The top third of the 28m high silos was removed by a crane early on Saturday.

A Ministry of Health spokeswoman said depending on the weather, the middle parts could be taken down as early as tomorrow, and the bases would be removed soon after.

Ceres demolition company staff were being particularly careful about dismantling the silos because there were areas of "historic interest" near the site, and they had obligations to meet around heritage and artefacts. 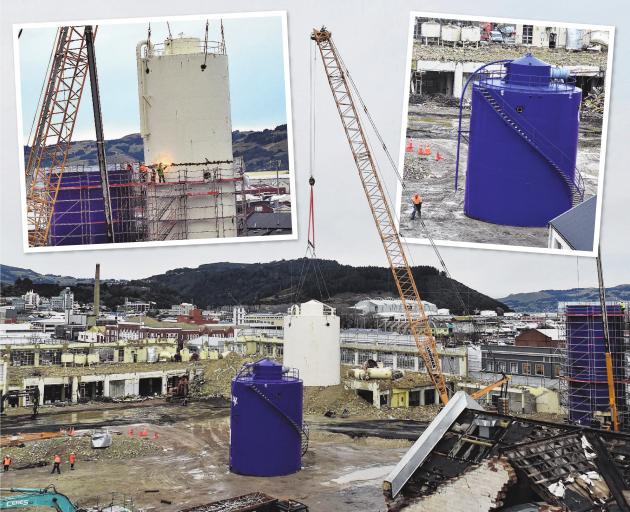 Ceres New Zealand demolition contractors remove the tops of the Cadbury silos. PHOTO: GREGOR RICHARDSON
It is not yet known what, if anything, is under the site.

The ministry spokeswoman said the steel structures would be recycled.

Initially, Ceres was not expected to remove the silos until late October or early November.

"They’re certainly well ahead of schedule. They are a phenomenal team."

She said demolition of the site was almost complete, but there was still a couple of months worth of work to do.

Eventually, and $1.4billion dollars later, there will be a new Dunedin Hospital on the site.

An outpatient building, which will include day surgery and non-urgent radiology, is expected to open on the northern former Wilson car park site in January 2025.

The inpatient building will be built on the former Cadbury factory site and will house the emergency department, operating theatres and a dedicated primary birthing unit, all scheduled to open in April 2028.