A man who swam away after a driving a car into the chilly waters of Otago Harbour at Broad Bay was found in a hypothermic state and risked drowning, the Coastguard says.

A police spokeswoman said the vehicle went into the water near Bacon St about 5.35am. Two woman were taken to Dunedin Hospital in a moderate condition.

A third person, a man believed to be the driver, was last seen "swimming across the bay", an officer at the scene said.

However, by 7.25am the man had been found sheltering in bushes not far from the rescue vehicles. He was also taken to hospital in a moderate condition. 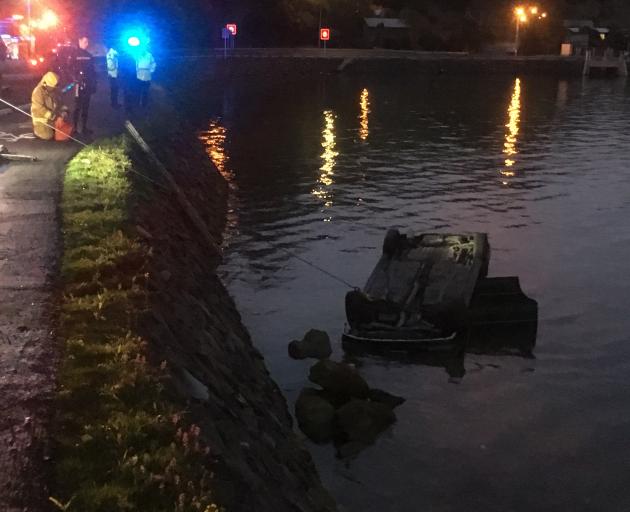 Emergency services at the scene this morning. Photo: Stephen Jaquiery

The driver was found on dry ground at Yellowhead, in a hypothermic state, after swimming across Turnbull Bay.

A Coastguard spokeswoman said the distance from where the car ended up was "reasonable" but appeared to be less than a nautical mile. She estimated it to be a few hundred metres.

The Coastguard said when the man was found, he was very cold, and had been at risk of drowning.

A Fire and Emergency New Zealand spokesman said when the fire service arrived about 5.55am, St John were already on the scene looking after two 20-year-old women.

The fire service and Coastguard searched on board the coastguard boat, and used thermal imaging in an attempt to find the driver in the water.

Divers were also at the scene.

It is not yet known whether the police will lay charges against the driver.

The vehicle was retrieved from the harbour waters. Photo: Stephen Jaquiery

An Otago Daily Times photographer at the scene said two young women were out of the car and cold and wet when he arrived at the scene.

A St John spokesman said all three occupants were taken to hospital by ambulance in a moderate condition.

Coastguard, fire crews and Search and Rescue personnel were involved in the search for the man.

By 7.15am a tow truck had hauled the vehicle out of the water.