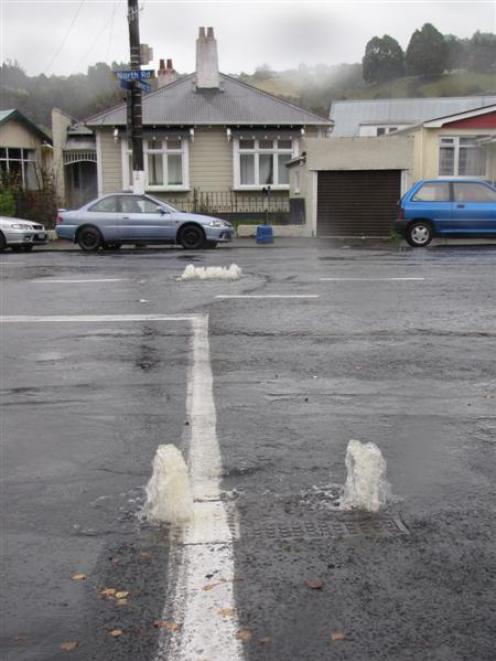 Flooding in Dunedin. Photo by ODT.
The cost of damage from last month's flooding of low-lying parts of Dunedin is about $30 million and rising.

That total will compound further as claims trickle in, amid accusations some of those in need have been left high and dry.

However, that is set to rise as additional claims are lodged and processed.

Dunedin South MP Clare Curran says the figure does not reflect the full hardship suffered by the area's residents, as many in lower-income suburbs have lost all their possessions and have no insurance.

More than 175mm of rain fell in the city on June 3 and 4, with heavy rain falling continuously for 17 hours.

''There's a lot of people that lost most of their possessions who were not insured.

Dunedin City Council community and planning group manager Nicola Pinfold said 46 people had applied to the mayoral relief fund, which was set up in the wake of the flood, and $46,000 had been paid out.

Applications were still coming in and the council expected them to continue for some time, she said.

An Earthquake Commission spokesman yesterday said EQC received 126 claims stemming from the deluge. More than 85% had been assessed, but it was too early to give an indication of settlement cost, he said.

Those figures followed last week's revelation flooding had caused more than $2.75 million worth of damage to council infrastructure.

Ms Curran said the extent of the repair bill vindicated her view a state of emergency should have been called: ''Thirty million [dollars] in damage counts as a disaster in my books.''

''This is a provisional figure. I believe the figure will be higher than that,'' Ms Curran said.

She was disappointed six weeks had passed since the floods and many residents from the hardest-hit suburbs were yet to return to their homes and faced ongoing hardship.

''People who were put up in motels for the first few weeks have been forced to find other accommodation,'' she said.

''These are families and older people who are struggling to work out what to do and when they can get back into their homes.''

She predicted many faced another six weeks of anxiety and uncertainty.

''We are still finding people who are waiting on work, waiting on assessments,'' she said.

Insurance Council chief executive Tim Grafton said it would be months before the all-up cost of Dunedin's floods was known.

The full cost to insurers would be known in early October, he said.

DCC roading maintenance engineer Peter Standring said the majority of the council's $2.75 million repair bill would be spent on roading.

The council was primarily focused on first repairing damage to Otago Peninsula caused by slips, he said.

There were also issues with Malvern St, Highcliff Rd and roads in St Leonards.

''Some of that is going to require engineering work before we can repair them,'' he said.

''The scope and the ground conditions mean they need a bit more design.''

Despite the abundance of groundwater in South Dunedin, St Kilda and St Clair, the roads were mostly unaffected and many minor repairs were completed, he said.

The council aimed to complete the more extensive repairs by September, so the roads were fully operational for the tourist season.

A New Zealand Transport Agency spokeswoman said the agency would pick up part of the roading bill under emergency works funding, but could not comment on the figure, as work was ongoing.