Forbury Park back from dead with races allocated; sells package of land 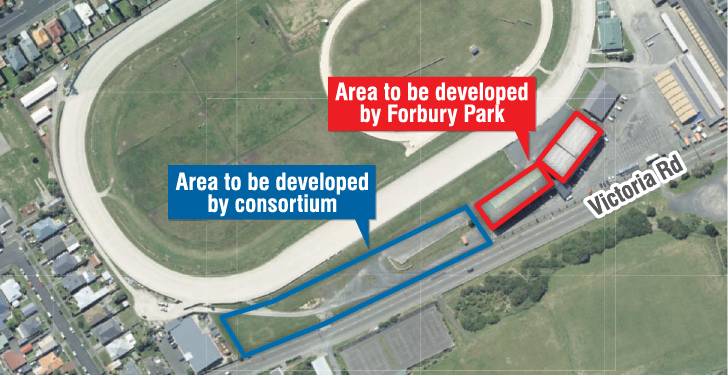 Graphic: ODT
Forbury Park has got off the canvas and is alive, confirming it has been reallocated race dates and has sold a parcel of land to a local consortium for more than $1million.

The club said it was thrilled to be racing again and moving to Wingatui may be a long-term option.

Yesterday was D-Day for the race track and the club at Forbury Park as the final calendar for the 2020-21 season was released. The draft calendar indicated Forbury Park had lost all of its meetings, both in harness racing and greyhounds.

But after some lobbying from the club, the Racing Industry Transition Authority (RITA) yesterday confirmed it had allocated 10 dates to the Forbury Park club and also 10 dates to the Otago Greyhound Racing Club, which races at Forbury Park. The trotting club will also host the Tuapeka meeting on October 25.

Forbury Park Trotting Club chief executive Della Henderson said it was very exciting for the club and acknowledged the hard work done by the board, staff, club members and supporters.

The club had 20 dates last season and she said it could operate with 10 dates.

It had agreed to take part in a feasibility study which would look at its long-term future.

The club had sold off a piece of land, between the old stand and the southern end of the ground on Victoria Rd.

She said the land had been sold to a local consortium to use for residential housing. She declined to say who bought the land but confirmed it had been sold for more than $1million.

"We have been really focused from last year trying to secure a future for the club. From October-November last year we have been trying to put a plan in place," she said.

"We have managed to do that ... but we have not sold the land to get the dates. There was never a conversation around that."

The option of moving the club to Wingatui was one which would be considered.

The Racing Industry Transition Authority yesterday said licences allocated to Avondale — which received five dates — and Forbury Park were conditional on regional reviews of racing in Auckland and Dunedin being completed by the end of this year.

Forbury Park’s first harness meeting is set for October 1, while the first greyhound meeting is on September 3.

So thoroughbred racing gets $20 mill of taxpayer money to construct two all-weather tracks in Cambridge and Chch, but Dunedin's harness club, which built and paid for its own all-weather track decades ago, may be forced to move to the grass at Wingatui.

Confused? Whoever's in charge of racing these days certainly is.

Intensely sad..... Grey hounds die because of this 'sport' every week both in NZ and in Australia. It is a terrible business that humans should be ashamed of. We can only hope that this insane gambling industry at the expense of animal life will be forbidden soon.

Certainly not something that tax payers money should be abused for.

It is not a good sign to sell assets off especially the parking area - once its gone its gone (they have already done this in the past if anyone remembers and I wonder were this money has gone - but obviously they need more money again. I wouldn't be investing into new premises as they only have 10 race meetings and year by year proposition. Must be costing them a lot to run the place for the year in wages alone for 10 meetings is this even viable but with 1 million I suppose that will go a long way - I wonder what their long term strategy is. Come on ODT investigate fully on the future, planning, dates and viability of the organisation

I hope this land has been purchased by the DCC in preparation for managed retreat of the playing fields. It would be unwise to let Forbury park be used for any further developments due to the uncertain future plans on the nearby coast.