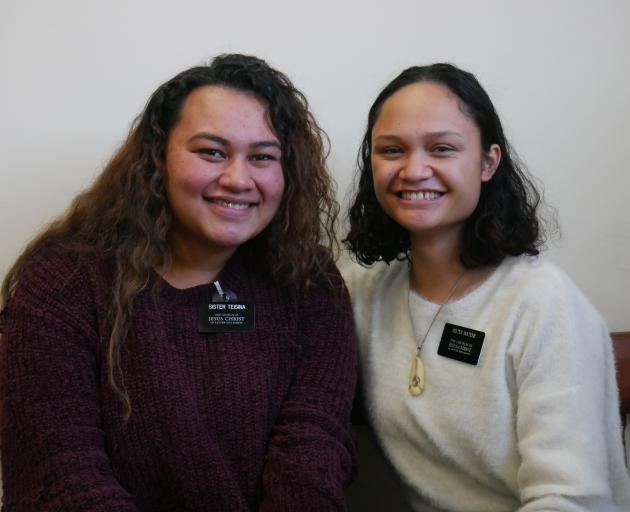 Friends Akosita Teisina (left) and Arohanui Watene along with Tyla Tuala (not pictured) did odd jobs for people for free last month. PHOTO: JESSICA WILSON
Pulling weeds and painting walls is all in a day’s work for three friends.

They posted their offer on social media late last month and were met with lots of positive feedback.

About 15 people reached out to ask for help.

The women, who are missionaries at The Church of Jesus Christ of Latter-day Saints, completed a range of tasks over five days.

They worked in two nurseries, albeit in different ways.

One was a baby nursery where they helped to hang decorations, and another was a plant nursery.

The women were inspired by their friend in Nelson, who had done something similar, and wanted to get to know people in the community.

"We just wanted the community to know that we are just here to help," sister Watene said.

"The most rewarding thing is being able to meet new people and hear about their life story and what caused them to reach out.

"One thing that we’ve been trying to develop in terms of qualities as a person is being able to be a listening ear."

So while the women may not have been able to help people solve their problems, they were able to help by listening to them.

A small gesture like that meant so much to someone, sister Watene said.

The people who contacted the women ranged in age, but most common were elderly people and mothers.

The women agreed that they wanted to help as much as possible.

"We only get 18 months as missionaries to serve... and so we want to serve at very opportunity we can," sister Teisina said.